This Video Of A Woman Sharing The Truth Behind Waqar Zaka

If you thought that the Waqar Zaka-Junaid Khan saga ended on a positive note with a reconcile between them, you are wrong. This time, hell did not break loose between them but I am sure it might when you come across the shocking claims of a girl about both, Waqar Zaka and the antagonist, Junaid Khan.

It all started when a video started circulating and eventually going viral all over social media featuring TV anchor, Waqar Zaka getting violently beaten by a group where armed men were also present. The base of such an incident revealed that Waqar Zaka misbehaved and supposedly harassed a girl who was a close friend of Junaid Khan, while he retaliated and beat Waqar on a street in Clifton, Karachi.

The entire incident amazingly went viral. The matter was drastically brought to the notice of police while both parties were seen dramatically challenging each other to a duel on various locations of Karachi.

It became an epidemic of a trend and followed viral statements like, “boss mai ne apko bola kya hai?” and “trimmer lao”. People went crazy about it! 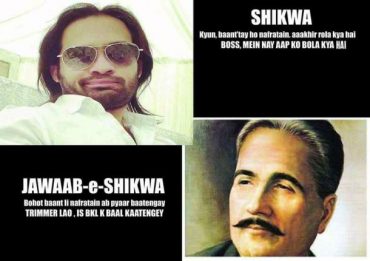 Now the story takes a dramatic twist. A girl who claims to know both Waqar Zaka and Junaid Khan is putting shocking claims regarding both of them.

She says that they both have been faking it this entire time and it was all pre-planned to gain publicity and what not.

Let’s find out what she has to say about the Waqar-Junaid saga:

If all of this is true, we only have one thing to say:

Well, hold on… There are always two sides of a story. We need to look at the other side of the story and then judge. Maybe this is another attempt just to seek attention by some random person with obnoxious claims. She could be even true with all her claims but one must not rule out any possibility of it being totally falsehood.

But then, the things she has to say are mind boggling. One cannot help but patiently listen to her as she speaks and highlight the subtle details no one ever paid attention towards before.

God knows what is happening!

So far, this video has touched an alarming nerve with people. Some choose to believe it while others label it as a baseless claim, another token propelling in the current of nonsense stories.

What do you guys think of the girl’s claims? Do you believe her and that the whole Waqar Zaka-Junaid Khan scene not fake at all?

Here Is How Brand Consciousness Is Damaging Our Society And Its People!
The Resplendent Sounds Of KPK – Patari Tabeer’s Final Episode Released And It Is Absolutely Amazing!
To Top