Who Are Uzma Khan & Huma Khan? This Is What We Know So Far

Since videos went viral of a gang of women who broke into actress Uzman Khan’s house and caused havoc for allegedly having an affair with a man called Usman Malik, social media has been up and arms about the whole incident.

Actress Uzma Khan may not be the most famous face in the Pakistan entertainment industry, but the incident has shed light on her. Many have raised questions over the despicable behavior of Usman Malik’s wife.  Uzma Khan has also released a statement sharing her side of the story with the world.

This is my official statement – Remember your gunmen pointed their guns towards two orphans and sexually harassed. We might be weak but now we have faith in Allah and people of Pakistan. I request you to share my statement and standby me in my difficult times. #uzmakhan pic.twitter.com/0QNgBUlTRb

Who is Uzma Khan?

Apart from films, she has been seen doing modeling for big brands. Uzma has also walked the ramp for many famous Pakistani designers.

While Uzma’s sister Huma Khan is also a model with over 132k followers on Instagram. She has worked for notable names such as Maria B. and Rizwan Baig and Munazza Rizwan couture.

A great human being and a talented designer Maria B. , it's always pleasure working with you 🤗 @mariabofficial

They lost their mother five years ago and since then the sisters have been living alone together.

They say time heals everything but I tend to disagree, it’s been 5 years since I lost my mother and pain is still fresh, it still feels like yesterday. Until We Meet Again … Those special memories of you will always bring a smile if only I could have you back for just a little while Then we could sit and talk again just like we use to do you always meant so very much and always will do too The fact that you’re no longer here will always cause me pain but you’re forever in my heart until we meet again .. My heart is full of memories with pride I speak your name .thought life goes on without you, it will never be the same . Can’t wait to see u again 💔I love you she was my best friend and love of my life I miss u every Second of my life 😔. Keep my mother and my father in your prayers in this holy and beautiful month of Ramadan

Actress Uzma Khan may not be the most famous face in the Pakistan entertainment industry, but this controversy is sure to leave a mark on her career. 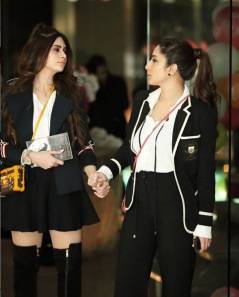 Moreover from issuing an official statement, she now seeks support from the people of Pakistan on the matter.

Since coming out with her side of the story, actress Uzma Khan has also hired a legal team to fight her case, which includes stab-wound survivor Khadija Siddiqui and PM Imran Khan’s nephew Hassan Niazi.