Almost everybody in the country who has a tv and someone in their house watches Pakistani dramas, knows about actress Ushna Shah. Coming from a home of media people, Ushna, although acquiring education from the York University, is as Pakistani as one could be.

Recently, an incident occurred that forced the actress to take to social media, and put forth her claim and narration of what happened at one of the country’s airport. Apparently, Shah was on her way out of the country, on vacations, going to Canada, Dubai and Italy. Though Shah had sorted all her troubles, the encounter she faced with the female security staff whilst still in the country became talk of the town. 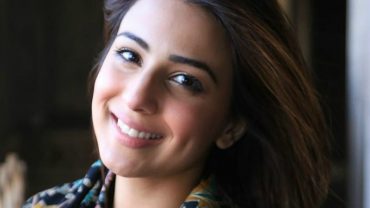 As per the Facebook post Ushna Shah had put up, it said: “Pakistan airport female security. Back of the hand frisking LEARN BACK OF THE HAND FRISKING you perverted lesbians!”

Later in the comments of the post, she further went on to say: “It’s not funny. Every damn flight at security checks I grit my teeth, hold my breath and close my eyes. It’s a harrowing traumatic experience and I am sick of it. And it only happens in Pakistan!”

“They even squeeze sometimes, I’m sick of it! I’ve been complaining about this for years. Like they do like an unnecessary squeeze like oh what are you hiding? Nothing lady, I’m hiding nothing here,” she wrote on in a comment under the status. Apart from this, women also discussed how female airport security staff gets into unnecessary chatter with the passengers as well. Questions like, “kahan jarahi ho?” etc, serve as genuine bothers to the passengers. 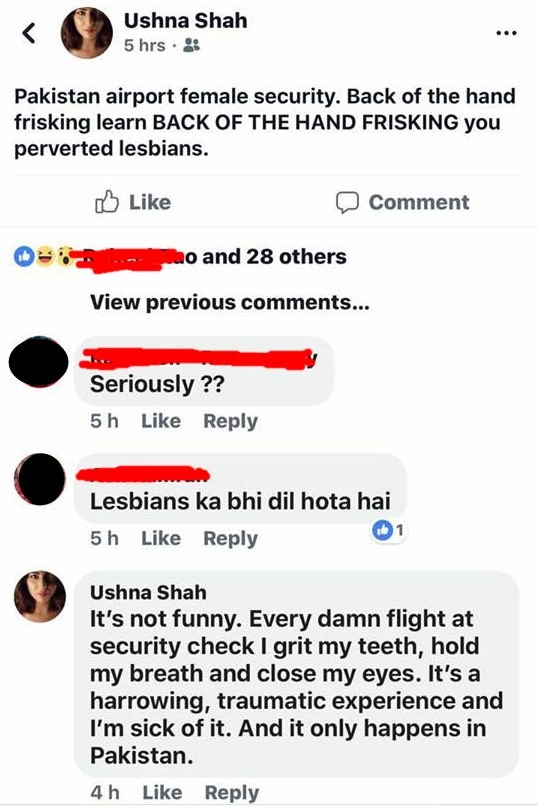 Plus, these women say and state that this is borderline harassment. Instead of using the back of their hands to do a full body search, the airport security women, start groping the female passengers with the front of their hand, something which does not happen ANYWHERE else in the world. Pakistanis are outright pioneers of this ‘detailed’ checking. 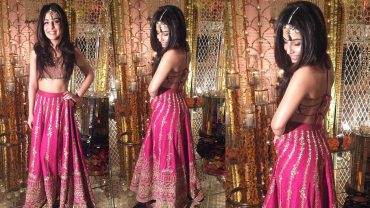 Airports need to train their female staff well, through proper workshops in security checking and how to deal with passengers, who again, are customers and respected citizens of the country. Furthermore, proper CCTV cameras should also primarily watch these women officials deal with female passengers, so that in time, the vice can be dropped completely.

Ushna Shah’s wrath and anger at such ‘security checking’ is valid and of course, as an influence, her word serves better than that of a common woman. More power to you, Ushna Shah!