The United States has praised and appreciated the opening of the Kartarpur Corridor, mentioning the project to be a great platform for religious freedom.

Prime Minister Imran Khan inaugurated the Kartarpur corridor for the Indian Sikh pilgrims and warmly welcomed the Sikh community into the country. The shrine is a place where Guru Nanak Dev, who was the founder of Sikhism, spent a good 18 years of his life. And the inauguration appears to be a couple of days before the 550th birth anniversary of Guru Nanak Dev. 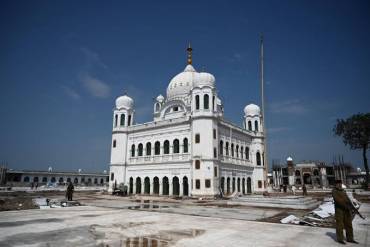 The corridor is the second holiest place for the Sikhs. Hence, this gesture by PM Imran Khan was met with appreciation from the Sikh community. Because they were provided the opportunity to finally visit the place without tense restrictions.

U.S Praises The Opening Of The Corridor:

The U.S was keen on catching the revolutionary moment as well. The US State Department Spokesperson Morgan Ortagus posted a video on her Twitter account applauding the decision from Pakistan’s side.

Furthermore, she went on to add, “The State Department welcomes the opening of a new border crossing between India and Pakistan, the Kartarpur corridor. We see this as a positive example of neighbors working together for mutual benefit. The newly opened corridor is a step towards promoting greater religious freedom,”

.@StateDept welcomes the opening of a new border crossing between #India & #Pakistan, the Kartarpur corridor. This corridor is a step towards promoting greater #religiousfreedom. Best wishes to the pilgrims making the crossing for the 550th anniversary of Guru Nanak’s birth. pic.twitter.com/CpkKD6ztgB

“Congratulations to Pakistan on this initiative, and our best wishes to the pilgrims making the crossing for the 550th anniversary of Guru Nanak’s birth,” she decided to conclude.

Her words, “The newly opened corridor is a step towards promoting greater religious freedom,” also remain as a reminder that Pakistan has been working for the minorities and people of different faiths. Moreover, Sikhs from not only India have appreciated the opening of the corridor. But Sikhs from all over the world have been expressing their gratitude for the generous decision from Pakistan.

We live in a time where differing religions are the reason for war. So, it looks like it’ll engrave itself as a historic decision.

Though this initiative is a step closer towards religious acceptance, it also serves as an impressive factor for economic improvement. Considering the amount of Sikh pilgrims traveling to the corridor, it would boost religious tourism.

This would generate a decent income for the country and promote a safe image of Pakistan as well. Therefore, a chain of tourism could be ignited ensuring positive effects on the economy as a whole.

What do you think of the situation? Do you believe the opening of the Kartarpur corridor as a great step for the betterment of Pakistan? Is this bringing us closer to the concept of religious freedom? Share your thoughts using the links below.