US President Donald Trump has made a decision that will catastrophically affect hundreds of thousands of Pakistani students in the US. On Monday, the Immigration and Customs Enforcement (ICE) declared in a press release that the fall 2020 semester students attending schools operating completely online may not take a full online course load and stay in the US.

Moreover, federal immigration authority has announced that all foreign students pursuing degrees in the US have two options. Either they leave the country or risk deportation in case their universities switch to online classes entirely in this fall semester.

As if the pandemic itself was not enough bad news that the US had to drop this bomb.

Let’s not forget that foreign students often pay full tuition which is a key source of revenue for most US universities. On what grounds are the US Immigration and Customs Enforcement (ICE) agency even making this decision?

In addition to this, students holding visas for either academic or vocational courses that have switched to fully online have only two options. Both of these are utterly baseless. The first option being; either depart the country, while the second option being; transfer to a school with in-person teaching- to ‘remain in lawful status’. Moreover, ICE stated that failure to do this could result in deportation proceedings. 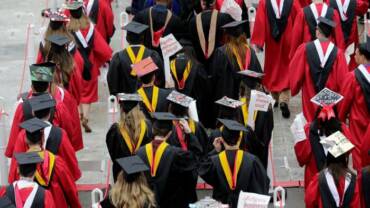 Some colleges and universities have begun to announce their fall 2020 semester plans. While most of them have not yet announced anything.

The number of students from Pakistan had an increase of 5.6 percent over the previous year.

People are not at all taking the news well.

Today the US left its intnl students stranded when it suddenly declared that those enrolled in online-only classes would have to go back home.This follows the recent H1B visa suspension. Is this just Trump appeasing his voter base?But how, when these things barely make the news?

The cruelty of this White House knows no bounds. Foreign students are being threatened with a choice: risk your life going to class in-person or get deported.

We must stand up to Trump's bigotry. We must keep all our students safe. https://t.co/Q2MvmgJPqV

The ICE guidance is germane to the holders of F-1 and M-1 visas- for academic and vocational students. According to the agency’s data, the State Department issued an estimate of 388,839 F visas and 9,518 M visas in fiscal 2019. Getting a US Visa is already very difficult, along with being a cumbersome process.

On the other hand, students who will be taking classes in person are not affected by the aforementioned guidelines. However, how are the other students at fault for their classes switching to fully online?

In addition to this, President Donald Trump’s administration imposed a number of new restrictions on legal and illegal immigration due to the Covid-19 outbreak.

Last month, the work visas of the nonimmigrant workers were suspended. This included a range of doctors, au pairs, seasonal workers, guest worker visas, scientists, and many more. In fact, even green cars- that offer permanent residency were suspended. It is argued that they were competing with the American citizens for jobs as the pandemic is damaging the US economy.