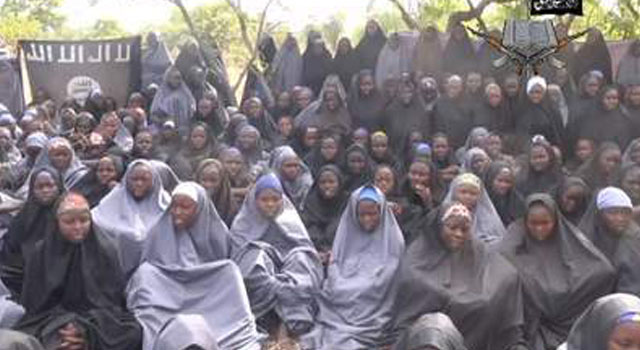 The U.S. military is flying manned missions over Nigeria in hopes of locating the hundreds of schoolgirls who were kidnapped by an Islamist extremist group last month, a senior official tells Fox News.

The official said the manned missions are intelligence and surveillance missions. At a press briefing Monday White House Press Secretary Jay Carney said the U.S. had experts in a variety of areas, including reconnaissance and surveillance, working on the case of the missing girls. However he said he did not have a â€œcatalogâ€ of the specific resources the experts were using.

â€œThey are actively involved in working with the Nigerian government to provide the advice and the expertise that they can provide to assist in that effort,â€ Carney said.

The information comes as a new video, believed to be from Boko Haram, the group behind the kidnappings, surfaced Monday showing more than 100 of the kidnapped Christian schoolgirls praying to Allah.

The video also features the Islamic terror groupâ€™s leader â€“ who was reportedly negotiating with the government â€“ saying he will hold the girls until imprisoned militants are freed.

When asked about the option of trading the girls for imprisoned militants, U.S. State Department spokesperson Jen Psaki said Monday, that is up to Nigeria.

â€œAs you know, Nigeria is in the lead. We are simply supporting their efforts. As you know also the United States’ policy is to deny kidnappers the benefits of their criminal acts including ransoms or concessions,â€ Psaki said at a press briefing.

The video is the first sighting of the abducted girls since more than 300 were taken April 14 from their school in the northern town of Chibok by Islamist militants. Although more than 50 girls escaped their captors and are now safe, at least 276 remain missing.

The search so far has centered on the Sambisa forest, with Nigerian troops being aided by advisers from the U.S., Britain and France.

Pentagon spokesman Col. Steve Warren clarified the U.S. presence in Nigeria for reporters Monday, saying there are more than 50 U.S. military personnel and advisors based at the Nigerian Embassy to help â€œadvise and assistâ€ in the search for the missing girls. The teams have expertise in â€œcommunications, logistics, civil affairs, and intelligence,â€ Warren said.