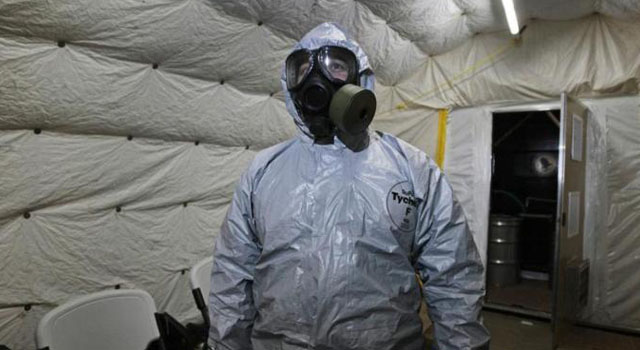 The US has indications that a toxic chemical, probably chlorine, was used in Syria this month and is examining whether the Syrian government was responsible, according to the US State Department.

Jen Psaki, State Department spokesperson, said there were indications of the use of a toxic industrial chemical in the town of Kfar Zeita, a rebel held area in Hama province in Syria.

Syrian opposition activists reported that helicopters dropped chlorine gas on Kfar Zeita on April 11 and 12.
Psaki said chlorine was not one of the priority one or two chemicals Syria declared to the Organisation for the Prohibition of Chemical Weapons (OPCW) under a Russian-US agreement for the destruction of Syria’s chemical weapons stockpile.

The Syrian government and rebels exchanged blame over the incident in Kfar Zeita in its aftermath earlier this month.

There was no independent confirmation of the attack which both sides said wounded more than 100 people.

State media accused the al-Qaeda linked group the Nusra Front of carrying out the attack and said it also planned more attacks in other parts of Syria.

Amateur video uploaded to YouTube and social media sites purported to show the attack and its aftermath.

Syrian state television reported the incident on April 13, saying two were killed and more than a 100 injured when the Nusra group attacked the village with chlorine poisoned liquid.

They said this chemical attack, the fourth the opposition has reported this month, was in the Harasta neighbourhood of Damascus.

The Syrian government failed to meet a February 5 deadline to move all of its declared chemical substances and precursors, about 1,300 tonnes, out of the country. It has since agreed to remove the weapons by late April.

Syria has shipped out or destroyed approximately 80 percent of its declared chemical weapons material, the head of the international team overseeing the disarmament process, Sigrid Kaag, said on Sunday.