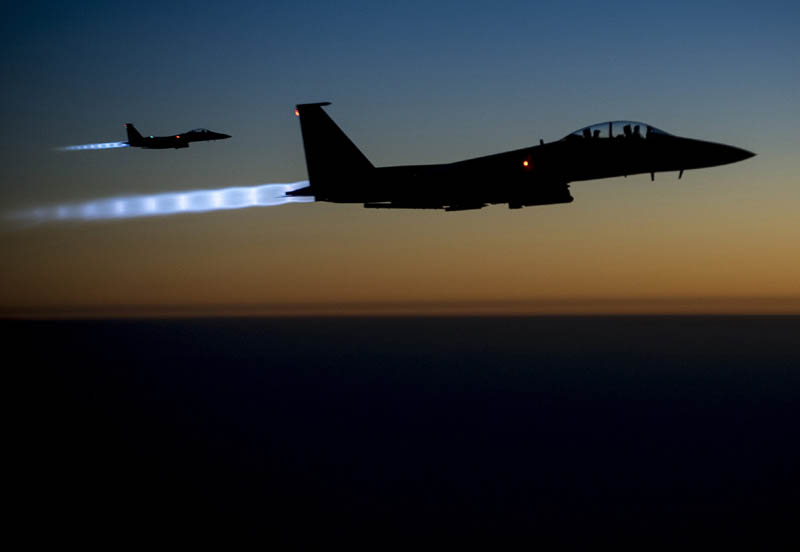 WASHINGTON: The Pentagon said on Saturday that it had conducted its first strikes against Islamic State targets in a besieged Kurdish area of Syria along the Turkish border, destroying two armored vehicles in an area that has been the subject of a weeklong onslaught by the Islamic State.

The action around Kobani, where at least 150,000 refugees have crossed into Turkey, appeared to signify the opening of a new front for American airstrikes in Syria, and came on a day when several other strikes took place in Raqqa, the de facto headquarters of the Islamic State’s forces, and other sites in the eastern part of the country.

Symbolically, though, the modest strikes around Kobani demonstrated some American and Arab commitment to the direct defense of the Kurds in an area that, village by village, has been falling to Islamic State forces.

After days of pleading for air cover, Kurds watching the fighting from across the Turkish border west of Kobani were gleeful as jets roared overhead and two columns of smoke could be seen from the eastern front miles away. They hoped it meant that American warplanes had finally come to their aid.

Without President Obama, said Sheikh Mohammad Bozan, a Syrian Kurd, “we would all lose our heads.”

Nearby, Syrian and Turkish Kurds cheered from hilltops dotted with fig and olive trees and army foxholes as Kurdish fighters scaled a ridge and fired a heavy machine gun mounted on a pickup truck at an Islamic State position less than a mile from them. Islamic State fighters could be seen moving from a nearby village, but seemed to be shifting tactics in a hedge against airstrikes, moving one vehicle at a time rather than in a convoy.

The fighting took place just a few hundred yards inside Syria, clearly visible from hilltop olive groves in Karaca, a frontier village on the Turkish side of the border. They fought with rocket-propelled grenades and heavy machine guns west of Kobani, the central town in the region.

As the day wore on, scores of Kurds gathered to watch from the relative safety behind the Turkish border, alongside journalists, Turkish soldiers watching from their armored vehicles, and even a few children. Despite the air of a soccer match â€” boos rose from the crowd when a rocket-propelled grenade fell short â€” the Syrian Kurds in the crowd knew they were watching one of their hometown’s last lines of defense. Over all, the Kurdish fighters still appeared to be outgunned by the Islamic State militants, with their tanks and artillery.

On the eastern front, a Kurdish activist, Mustafa Ebdi, said from Kobani that an Islamic State command post, a tank and a cannon had been hit by the American strike. Still, hours later, Islamic State shelling hit Kobani’s main town for the first time, killing at least two people.

In a statement, the United States Central Command said that strikes around the country had been carried out with forces from Saudi Arabia, Jordan and the United Arab Emirates â€” it did not specify which aircraft hit which areas â€” and that “all aircraft exited the strike areas safely.”

The administration has been eager to show that those three Arab countries, all dominated by Sunnis, are part of the effort against the Islamic State, which is also known as ISIS and ISIL.

The statement also said there were three airstrikes near Erbil, the capital of Iraq’s Kurdistan region, that destroyed four of the Islamic State’s armed vehicles and one of its fighting positions.

But for all the action in the air, it was unclear how much progress was being made. American strategists and retired officers like Gen. David H. Petraeus, the former commander of Centcom and an architect of the troop surge in Iraq in the latter years of the George W. Bush administration, have made clear that airstrikes alone, without coordinated ground attacks, may halt but are unlikely to reverse the Islamic State’s territorial gains.

But the United States has ruled out using combat troops on the ground, as have Britain and other allies, even while agreeing to provide air power.