The first human trial of a vaccine to protect against pandemic coronavirus has started in the US. Four patients have received the jab at the Kaiser Permanente research facility in Seattle, Washington on Monday.

US health officials have said they are hopeful that they will find the vaccine for the global pandemic.

US researchers gave the first shots of the vaccine on Monday. With careful jabs in the arms of four healthy volunteers, scientists at the Washington Research Institute began an anxiously awaited first-stage study of a potential COVID-19 vaccine developed in record time.

“We’re team coronavirus now,” Kaiser Permanente study leader Dr. Lisa Jackson said on the eve of the experiment. “Everyone wants to do what they can in this emergency.”

Four volunteers were given their first of two shots of the vaccine. Forty-five volunteers will participate in this trial. However, the vaccine won’t be available to the general public for at least a year to see if it is both safe and effective. 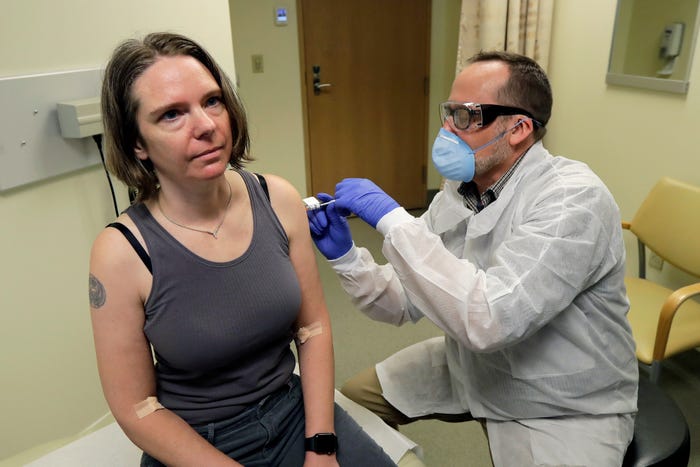 However, the first person to get the jab on Monday was a 43-year-old mother-of-two from Seattle. “We all feel so helpless. This is an amazing opportunity for me to do something,” Jennifer Haller told AP.

The vaccine is called mRNA-1273 and was developed by the NIAID scientists and their collaborators at the biotechnology company Moderna, Inc., based in Cambridge, Massachusetts.

Moreover, the volunteers were being given different doses of the experimental vaccine. They will each be given two jabs in total, 28 days apart, into the upper arm muscle. But even if these initial safety tests go well, it could still take up to 18 months for any potential vaccine to become available for the public.

The Seattle research institute is part of a government network that tests all kinds of vaccines. It has been chosen for the coronavirus vaccine study before COVID-19 began spreading widely in Washington state.

Trump said they have developed the prospective vaccine for COVID-19

Moreover, US President Donald Trump also announced that they have developed the prospective vaccine for COVID-19 in record time. He said they have started to test the vaccine and he hopes to find the positive results from it.

“I’m pleased to report today that a vaccine candidate has begun the phase one clinical trial. This is one of the fastest vaccine development launches in history. Not even close. We’re also racing to develop antiviral therapies and other treatments,” Trump told reporters at a White House news conference on Monday.

Furthermore, there are currently no approved vaccines or treatments against the coronavirus disease. It has infected more than 175,000 people across the world since it was first identified in China in late December. It has claimed more than 6,000 deaths, most in China followed by Italy.

However, earlier, Israeli scientists claimed that they have developed a new vaccine for the coronavirus.