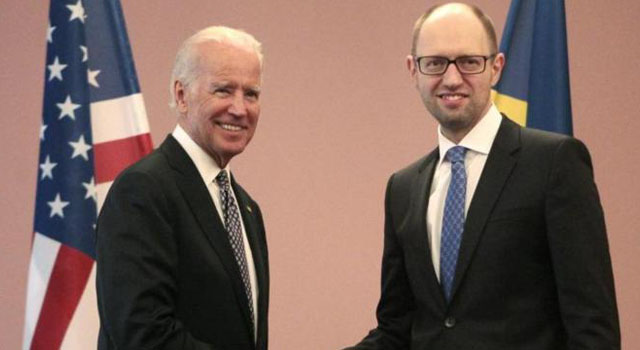 Joe Biden has told Ukraine’s new pro-Western leadership that it has the backing of the US against “humiliating threats” and encouraged them to root out corruption as they rebuild their government.

In the most prominent visit of a US official since the crisis erupted in Ukraine, the US vice president on Tuesday told leaders from various political parties that he brings a message of support as they face a historic opportunity to usher in reforms.

The gathering at a hearing room in the Kiev parliament, or Rada, included three candidates running in the May 25 presidential election – most notably the billionaire chocolate magnate and front-runner, Petro Poroshenko.

“You face some very daunting problems and some might say humiliating threats are taking place,” Biden told them.

“The opportunity to generate a united Ukraine and getting it right is within your grasp. We want to be your partner and friend in the project. We’re ready to assist.”

However, he told the meeting: “You have to fight the cancer of corruption that is endemic in your system.”

Later on Tuesday, in a news conference, Biden said that Ukraine must remain “one united Ukraine”, and criticised Russia’s takeover of Crimea.

“No nation has the right to simply grab land from another nation,” he said. “We will never recognise Russia’s illegal occupation of Crimea, and neither will the world.”
Biden also said Russia needed to defuse confrontations in the east of Ukraine.

Biden’s visit comes at a critical time, just days after a tenuous international agreement was reached to de-escalate violence in eastern Ukraine, where pro-Russia rebels oppose the government in Kiev.
Under the international deal, signed by Ukraine, Russia, the US and the EU, rebels were to disarm and give up buildings they seized in the east of Ukraine.

John Kerry, US secretary of state, and his Russian counterpart, Sergey Lavrov, on Monday each urged the other to put pressure on their allies, after three people were killed in an exchange of fire between rebels and Ukraine loyalists in the eastern town of Slovyansk.

Lavrov also accused Ukraine’s government of an “inability and unwillingness” to rein in Pravy Sektor – the right-wing ultra-nationalist group the separatists blamed for the attack Sunday.