The Upcoming Drama 'Alif' Is Grabbing Pakistan's Attention After Its Second Teaser Dropped!|Parhlo.com

The drama Alif, starring Hamza Ali Abbasi and Sajal Aly as the main characters, is gaining nationwide exposure because of its theme and catchy teasers.

What Is The Drama About?

The story of the drama revolves around an important issue that Pakistan faces mostly, which is the negative side of the entertainment industry. It seems that the story reaches out to mention that actors or actresses should not be manipulated by the toxic terms of the industry, and find their own way. Sajal Aly will be playing the role of Momina Sultan who is an up and coming actress. And Hamza Ali Abbasi is portraying a successful film director. 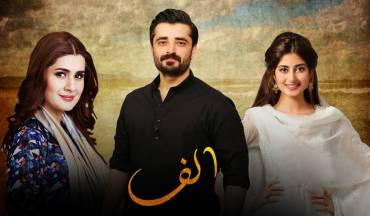 These two roles are enough for a person to realize what the plot will mostly focus on. The two characters are entirely different from each other and this leads to a bunch of conflicts between them. Abbasi’s character is outgoing and open, so he projects that same behavior onto the people that he works with. However, Aly’s character does not appreciate that, and despite being a struggling actress, she calls him out on his tactics.

The first trailer gives a good insight on the nature of the story and also introduces most of the characters to the viewers. People are also anticipating Alif because two of the most famous Pakistani celebrities will be sharing the screens. It is directed by Haseeb Hasan who also worked on famous dramas like Mann Mayal and Parwaaz Hai Junoon. The additional cast includes Ahsan Khan, Kubra Khan, and Osman Khalid Butt. 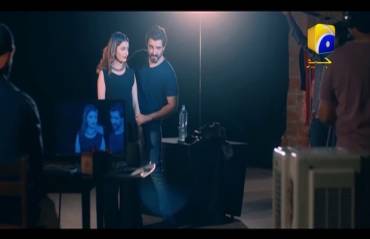 The recently released second trailer of the drama Alif dives a little deep into the relationship of the main two characters. At first, when one watches the first trailer, it seems that the drama give priority to the romantic element. However, as the further trailer drops, it is visible that we will get to see a discrepancy within the opinions of the two characters.

It is written on a topic that hits close too home for Pakistan. And it can serve as a great reminder that a lot of times our actors and actresses have to deal with tricky directors.

Most of the cast is full of prominent actors who are known for their impressive acting skills. So it is for sure that Pakistan is excited about Alif’s release!

Here is how Twitter is reacting to the drama and its teasers:

This user sums up everyone’s anticipation, “The teaser was mind-blowing, I normally wait for the drama to end before watching but Alif I won’t able to wait for that long.. So will watch week by week, everyone looks amazing”

The teaser was mind blowing, I normally wait for the drama to end before watching but #Alif I won’t able to wait for that long.. So will watch week by week, everyone looks amazing

Once again, the wait is real!, “Can’t wait for Alif drama..Its novel was one of the best novel I’ve read. Excited to see Sajal Aly as Momina and Hamza Ali as Qalb-e-Momin”

Can’t wait for Alif drama..Its novel was one of the best novel I’ve read 😍
Excited to see Sajal Aly as Momina and Hamza Ali as Qalb-e-Momin ❤ pic.twitter.com/FxEI5DjD6C

What do you think of the situation? Are you looking forward to the release of this drama? Will it be able to live up to its hype? Share your thoughts using the links below.

The Tragic Story Of Major Adeel Who Married An Army-Widow, Adopted Her Daughter & Embraced Shahadat!
Fall In Large-Scale Manufacturing For Eight Consecutive Months
To Top