It has been more than two weeks since Pakistan’s largest province learned of a shocking scandal. Yes, we’re talking about the ongoing cases of harassment that occurred at the University of Balochistan.

As learned, over 5000 girls have been subjected to harassment/blackmailing by staff in the last decade at the University.

In lieu of the case, students have been demanding rampant steps against the culprits. However, their demands did not stop there. Protestors at the UoB have asked authorities to remove the FC check-post from inside the university.

Removal of FC check-post from UoB

The Frontier Corps had been deployed in the University a few years back subject to threats from terrorist bodies. This is the 18th running day that students of the University of Balochistan are in protest. 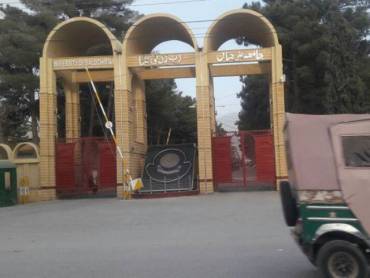 The former vice-chancellor of the university, Javed Iqbal Chaudhry, has suffered ill at the hands of allegations as well. It has been aired that the VC was also part of the scandalous events that took place in Balochistan’s largest university.

The whistle was blown when allegedly one girl with a strong family stood up against the charade, taking her case to the Balochistan High Court. It was then that the BHC ordered FIA to intervene and investigate the harassment/blackmailing mafia inside the University of Balochistan.

Many members of the staff, including Registrar Tariq Kakar and VC Chaudhry, are said to be part of the racquet. Different human rights activists from Pakistan visited the university the other day to hear the demands of the students.

Furthermore, protestors have also demanded the student bodies (student unions) be established in the university. The bodies were annulled due to increasing student politics.

“People and political parties should have firm trust in national institutions. Strict action will surely be taken against the people allegedly involved in sexual harassment and the video scandal. Action will be taken across the board.”

There is need the departments of education to must take the necessary steps to stop any form of pestering and harassment against students. The students are protesting against harassment and coercion of victimized students in #UoB. #UoBScandalExposed #SaveUOBQuetta pic.twitter.com/X83ZnraFaE

Some tribal leaders in the province have been urging ‘ghairatmand’ men from the society to take matters into their own lands. This would mean them taking the law in their hands too. If the FIA fails to establish a case based on merit and does not protect culprits, the people of Balochistan will be happy.

As of now, the biggest issue in the province is that parents and patriarchal men of families are not allowing their daughters to study in the University of Balochistan, in light of the recent scandal.