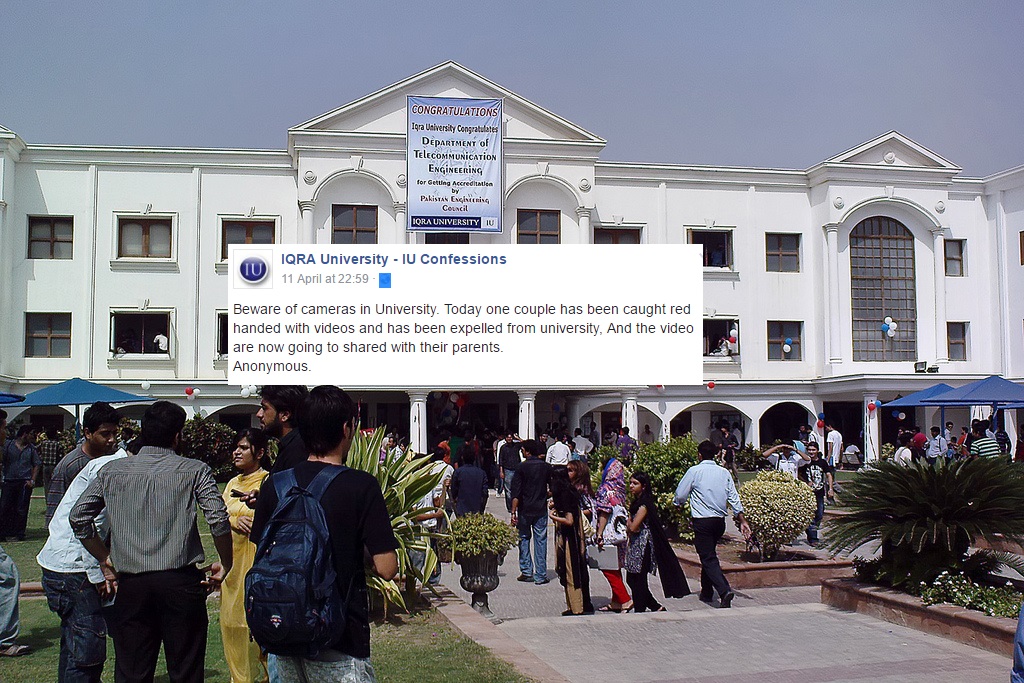 Ah…young love. Spending all the time together, hand in hand till one of your professors passes by. Fighting for attention and not to forget, sneaking here and there to spend some time alone with each other. Studying in a co-ed university has its perks, with one being getting the confidence to talk to the opposite gender which is something you need when you step in the workplace environment.

Aside from that, universities today have also become a hub of relationships. Like it or not, people fall in love in the midst of their books, assignments and exams. After all, what is the harm in having someone in your university who is always there for you?

The harm begins when you cross that ‘line’ in a public place and your relationship becomes the interest of everyone else on-campus. For example, look at this post by Iqra University:

If you are studying in a co-ed university, you might have come across a situation where a couple was stuck in something as unfortunate as this particular example. While there is a proper understanding of how doing such acts is ethically and religiously wrong (plis don’t fatwa @ me), here are some valuable tips for you:

1. Tell Your Parents About Each Other

If you are seriously in love with him or her, you might want to do it the legal way. After all, you are serious about each other. So instead of becoming such a horrible public example, why not create a better example?

Or an engagement would suffice as well. Point is, make it legal under the umbrella of Islam. If your partner is hesitant, you might want to question the seriousness of the relationship then.

If you cannot tell your parents about each other (which is something advisable), then try getting the pleasure of each other’s company by sitting in groups. Control, Udday!!!

As a university, it is the right of an educational institute to stop such actions as they are…ethically wrong. Agar itna pyar hai babu tou nikkah karlo.

Don’t Quit On Your Dreams, Simply Have Faith In Yourself And Allah!
Indian Forces Torture Kashmiri Kids And Force Them To Chant Anti-Pakistan Slogans
To Top