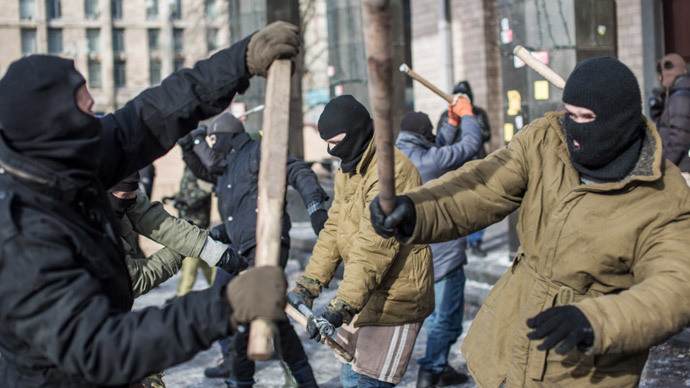 Moscow has accused a UN report on violence in Ukraineâ€™s Odessa of being purposefully blind to hard facts and simply â€œcarrying out a political order to whitewashâ€ the actions of the coup-appointed government in Kiev.

The Russian foreign ministry believes that the report presented by the UN High Commissioner for Human Rights is marked by a systematic and routine ignorance of any Kiev involvement in sparking the Odessa carnage, while placing all the blame unequivocally with the pro-Russian self-defense forces. The ministry statement remarks that not a single word was said about neo-Nazi elements who engaged in setting buildings on fire with people inside, shooting dead anyone who opposed them and finishing off the wounded in plain sight.

This especially concerns the events that took place in the House of the Trade Unions on May 2.

The foreign ministry believes that such â€œdouble standardsâ€ are a clear indicator of the international organizationâ€™s mission to pander to a select side in the conflict, without any regard for hard evidence.

The United Nations spoke on Friday of the â€œalarming deteriorationâ€ of the human rights situation in eastern Ukraine. The report by the organizationâ€™s head for human rights, Navi Pillay, focuses on the findings of the Human Rights Monitoring Mission in Ukraine (HRMMU) in the period since April 2 through to May 6. It speaks of the various rights violations encountered and offers recommendations to the current Ukrainian government, noting also its willingness to cooperate with the monitors. The report tries to underline how Kiev is taking concrete steps to implement the Geneva agreement of April.

Among other things, it also focuses on the problems the Tatar minority currently faces in Crimea – although thereâ€™s no mention of Kiev blocking the regionâ€™s freshwater supply â€“ which â€œviolates a whole range of human rightsâ€.

Moscow goes on to note that Pillayâ€™s monthly report failed to mention certain crucial facts: starting with the arson and the coordinated murders; the inaction by Ukraineâ€™s law enforcement, as well as the multiple arrests of individuals rallying for federalization; the multiple kidnappings and instances of torture, as well as lack of any credible evidence to back up those actions. In this interpretation, â€œthe entire story is basically being delivered as Kievâ€™s official line would have been.â€

The foreign ministry found it peculiar that â€œin some 30 pages of text, there is not one mention of any manifestation of aggressive nationalism and neo-Nazism in Ukraine.â€

Russia criticized the authors of the report for violating the principles enshrined in the UN Charter, which clearly dictates that political neutrality must be exhibited whatever the situation. “When the UN High Commissioner for Human Rights pronounced the Crimea referendum as ‘illegal’ following the suit of Kiev and its Western patrons, it seconded that it accepts a nationâ€™s right to self-determination established by international human rights laws only when it is politically favorable,” said the statement.

The icing on the cake, in Moscowâ€™s view, could be seen in the venue where the UN findings were presented â€“ and by whom: in Kiev, by the UN secretary-generalâ€™s assistant, Ivan Shimonovich, who has a â€œreputation for a lack of objectivity, making sweeping judgmentsâ€ and â€œunsubstantiated claims.â€

Shimonovichâ€™s role in the presentation is seen as â€œan unambiguous indicationâ€ of the OHCHRâ€™s bias and lack of independence and objectivity.