Umoja: A 'Women-Only' Village in Kenya Where There Is No Man, Only Peace

The question that comes to mind once one sees such an impossible claim is… why? Why isn’t any man allowed to this village? And all those women who have suffered through patriarchy and its aftermath know why would a need like that spring in a locality. Of course, in all the backward countries we have seen travesties of patriarchy that completely shake our world. Rape, sexual assault, genital mutilation. Because of all these reasons, there is a village called Umoja in North Kenya which is an escape from all men — all evil that had made their lives miserable.

Who founded this village and for how long has it been functioning like that?

These are some genuine questions that any person who has suffered in patriarchy would think of in order to make arrangements. What arrangements? Obviously to leave for this village which is apparently a haven for many women.

An escape from sexual assault and rape

It was almost three decades ago observed that the patriarchal society in northern Kenya was changing drastically. That’s when Rebecca Lolosoli founded this village which was a safe haven for 15 women, almost 30 years ago. The women in this village had escaped sexual assault and rape by British soldiers in 1990.

Even today, the purpose of this village is only to give shelter to the women who have experienced genital mutilation, sexual assault, and rape, domestic violence, or child marriage. In this video, the reporter reports how women of young age get married to men twice their age. She also addresses the subject of marital rape and sexual violence. These women were also sold to men for obvious reasons.

Umoja in Swahili means ‘unity’. Symbolically it reflects the unity of women against such treacherous men. This village has also assumed a political structure of matriarchy where women give each other a safe space to speak, dance, eat, etc. These women also encourage and empower other women in nearby villages to initiate their own society such as this kind. They believe that any village completely devoid of men could thrive better. Hence the absolute exclusion of men. 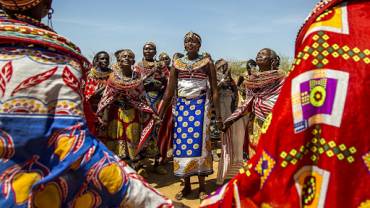 Just for an instance imagine Pakistan without men. Where no man has power, no man is serving any prominent role. No man is raping young girls or kids in masjid while aitiqaaf or no men sexually abusing animals. It will certainly put a good check on patriarchy, which ultimately will eradicate many vices from the land.

What do you think of the story? Let us know in the comments sections below!