Umar Akmal Lashes Out at Coach Mickey Arthur but there's a Twist in the Story!

Pakistan’s winning squad was all over the news after winning the Champions Trophy. The players who were missed out of the squad, such as Umar Akmal had to go through a lot of criticism because of not showing the best of their performance. After failing two fitness tests, the middle order batsman was excluded from the squad which had outdone themselves in England.

Pakistanis mocked Akmal for showing poor performance as a cricketer and Akmal came out with no justification, until now. According to the man himself, PCB coach Mickey Arthur “abused” Akmal in front of Chief Selector and former Pakistani captain Inzamam Ul Haq and Mushtaq Ahmed.

In outrageous violation of discipline, cricketer Umar Akmal does press conference against coach Mickey Arthur, accuses him of being abusive.

Akmal stated that while the coach was verbally abusing him, none of the players came forward. He also added that Arthur had told Akmal “to stop coming to the academy and play club-level cricket“. According to Akmal, he is coming out to inform the board of the poor attitude shown to him by the coach.

Hardly anyone is believing the words uttered by Akmal. Arthur denies putting on such an attitude towards the player who failed two fitness tests. The coach added that he instructed Akmal to fix his attitude and improve his skills.

For the annual assessment, the fat-level reading must be under 100 and Akmal, who weighed 91kgs stood with the fat-level of 115.6.

Because of these allegations, the PCB has released the notice of taking action against Akmal.

Twist in the Story? Akmal Said Inzamam and Mushtaq Ahmed were Eye-Witnesses of how Arthur Mistreated him, But Both Men have Denied Arthur Abusing Akmal!

I was there, Micky Arthur didn't abuse Umar Akmal, he was trying to convince him to work on fitness and perform at domestic; Mushtaq Ahmed

Umar Akmal got told off in the presence of Inzamam-ul-Haq & Mushtaq Ahmed and both have backed Mickey Arthur in this regard.

Wasim Akram on Umar Akmal "someone please tell him to keep his mouth shut."

there is no redeeming quality left in Umar Akmal anymore, he has gone full retard.

Given how the witnesses have denied the allegations, here’s what seems fitting for the situation: 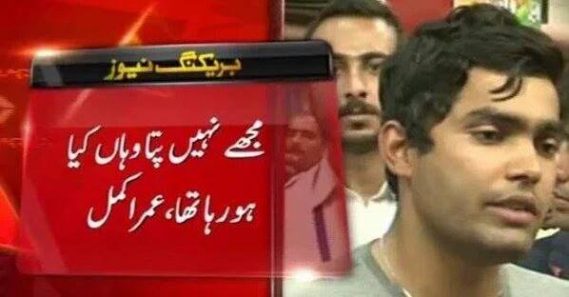 Regardless of what this controversy is, Akmal is known for throwing fits when things aren’t going his way. His fitness was an issue which came out when his name was discarded from the squad. The player needs to show some sportsmanship and own up to his mistake.

This Young Boy’s Tragic Death While Playing Cricket Is a Wake Up Call for Everyone
This Exclusive Interview of Jeremy McLellan Shows How Much He Enjoyed in Pakistan!
To Top