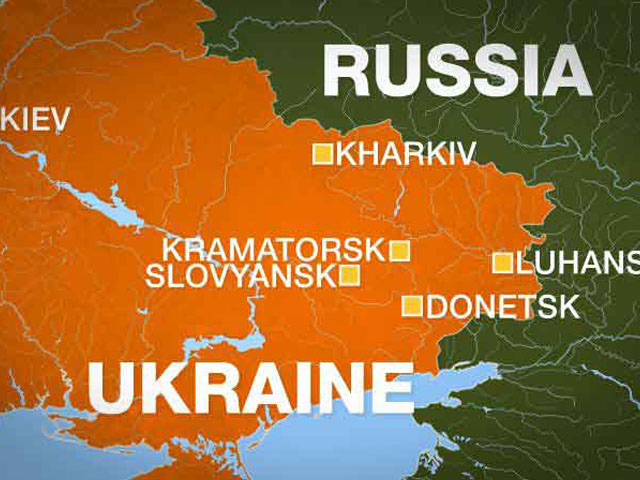 Pro-Russian forces in Slovyansk have shot down a Ukrainian helicopter gunship, killing one airman and wounding others, after the army launched an operation against the separatist stronghold.

Ukraine’s SBU security service on Friday said one Mi-24 gunship had been shot down, killing one airman and leading to the capture of another. A second Mi-24 made a forced landing after coming under attack while a third helicopter, carrying medics, was hit and a medic wounded.

The service said man-portable missiles were used against the helicopters – proof that “trained, highly qualified foreign military specialists” were operating in the area “and not local civilians, as the Russian government says, armed only with guns taken from hunting stores”.

Slovyansk’s separatist-appointed mayor, Vyacheslav Ponomarev, was quoted by Russia’s Interfax agency as saying two helicopters had been shot down and one pilot taken hostage.

Al Jazeera’s Jonah Hull, reporting from nearby Donetsk, said Russian TV had broadcast footage of the captured Ukranian pilot, who was injured and in distress. The video has also been uploaded to Youtube.

Armed groups seeking union with Russia have seized a number of government buildings in towns in eastern Ukraine.

Slovyansk has become one of their strongholds, and there have been regular clashes between pro-Russians and Ukrainian troops. Last week, Kiev sent troops to dismantle several roadblocks but withdrew forces soon after.

Russia has warned Ukraine it must not launch attacks on Ukrainian civilians, who it says have legitimate concerns. Kiev says the separatists are being boosted by Russian soldiers.