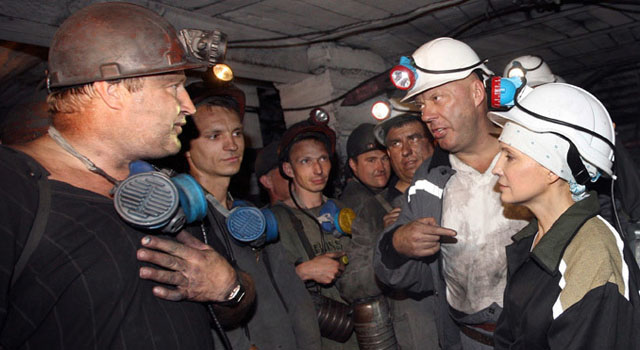 Over 2,000 coal miners in Lugansk region have been on strike for the second day running, demanding higher wages and refusing to accept a pay cut to fund the restoration of Kiev, which suffered damage during the coup that overthrew the government.

Some 80 percent of miners from five coal mines belonging to “Krasnodonugol” enterprise in the city of Krasnodon have not shown up to work. The mines are all owned by one of Ukraine’s richest man, Rinat Akhmetov of the mining and metallurgical “Metinvest” corporation.

Angry miners are pressing for wage increases to match region’s average pay, better social and living conditions and higher social bonuses. According to the strikers they get an average of 6,000 hryvnas ($520), while the average salary in the coal industry in the region is up to 10,000 hryvnia ($860).

Miners are also refusing to pay a 10 percent tax on their salaries, imposed by the post-coup authorities to restore the Maidan square in Kiev. The square and nearby buildings suffered significant damage during months of rallies and the violent standoff that led to a coup in February.

According to local media reports miners have seen around a 10 percent cut in their paychecks to restore the Ukrainian capital.

â€œI don’t understand why are we involved!â€ one of the protesting miners, Stanislav Denisenko told Itar-tass. â€œIt was not us who dismantled the stones and burned the houses down. I get about 900 hryvna a month, that is around 9,000 rubles ($260). I don’t understand why they are taking away my salary.â€