Uber, the largest taxi service transportation industry in the world, stepped into Pakistan in 2016. The popular ride-hailing service provided jobs to many unemployed people and made transportation a lot easier. However, it was only a matter of time that it became disrupted by corruption. From fraudulent hacks to outright stealing – Uber has certainly lost its way in Pakistan and now recently an Uber driver stole meat of a customer.

The incidences of Uber driver stealing the possessions of the riders might not come as a shock to you. Every other day, we get to hear stories of how someone forgot their cellphone in the cab and the driver refused to return it. Not only that but we have also come across many stories of Uber Eats, where the drivers allegedly steal food. However, this recent incident will definitely surprise you. 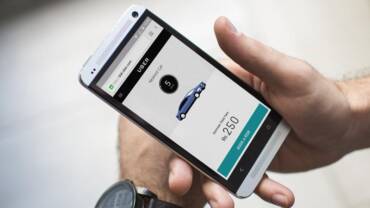 Yes, 100 kgs!! Well, the incident took place on the second day of Eid-ul-Adha, in Lahore. On August 3, a woman booked an Uber driver to deliver the qurbani meat to her house in DHA phase 4. However, according to a post shared by that woman in a Facebook group, the Uber driver blocked her phone number and ran away with the qurbani meat. As per the woman, the meat was almost 100 kgs. 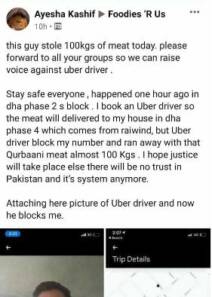 Needless to say, this is not the first time that an Uber driver has indulged in stealing. Uber overflows with a great amount of such horrifying incidents. Luckily, the woman had already taken screenshots of the driver’s picture and the trip details. However, there is no follow up news on the incident. 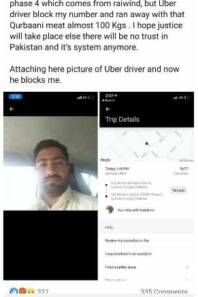 In addition to this, Uber has proved to be amongst the riskiest choices in Pakistan when it comes to taxi services. To say the least, the company has been leaking with an abundance of issues and risks, proving to be perilous to users. In a country where people are afraid to even confront a stranger on the street, the idea of strangers giving other strangers rides in their cars had a dim future even before its launch.

The international cab service despite taking the modern-day public transport by storm is doubtlessly not doing well in Pakistan. Petty theft cases on one side, the company drivers also indulge in sexual harassment. Moreover, a number of girls have even come forward to sharing their uncomfortable experiences with taxi-booking services.

Issues raised with the Uber app and most importantly, the awkward behavior of its drivers are massive! Recently, the reason behind the company stepping into corruption also came to the surface. As it appears, Uber drivers, as a result of not being paid enough have started to cheat and harass their customers.