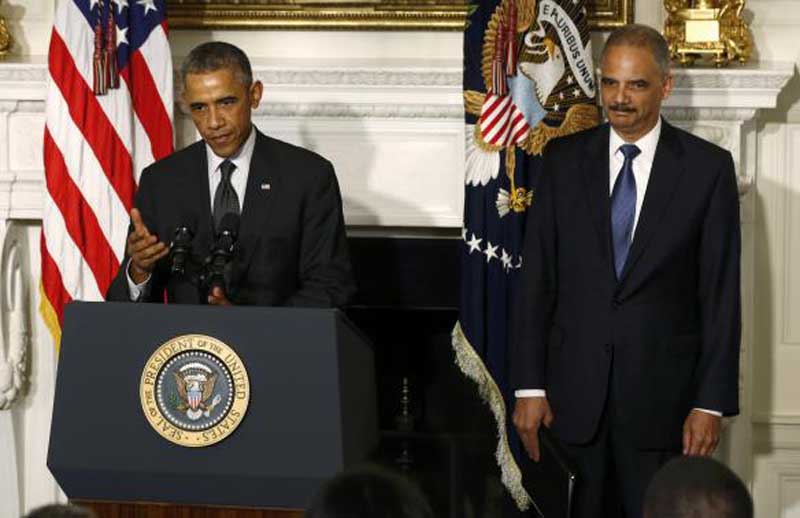 Eric Holder said on Thursday he would step down as U.S. attorney general, setting up a potentially bruising Senate fight to confirm a successor who can tackle a long list of pending challenges at the Justice Department.

Holder, an unapologetic liberal voice and one of President Barack Obama’s closest allies, will remain in office until a successor is nominated and confirmed. His nearly six-year term, marked by civil rights advances and frequent fights with Congress, made him one of the nation’s longest serving attorneys generals.

“I will never leave the work. I will continue to serve,” Holder, with Obama at his side, said during a brief White House announcement of his departure.

Holder’s successor also will oversee a series of cases against banks and individuals over the manipulation of foreign exchange rates, and must decide whether to continue Holder’s effort to scale back the prosecution of nonviolent drug offenders.

Holder’s departure could set off a tense confirmation fight with Republicans in a lame-duck U.S. Senate session scheduled after the Nov. 4 midterm elections, although the chamber’s majority Democrats can invoke rules making it easier to get around Republican efforts to block confirmation.

Republicans hope to gain a Senate majority in the elections, making it likely Obama will send up a nomination before a new Congress convenes in January.

Holder forcefully embodied many of the president’s most liberal positions, including support for more gun control, criticism of America’s prison system and a desire to try terrorism suspects in civilian instead of military courts.

Despite a drumbeat of Republican criticism since becoming attorney general in 2009, he was one of the last three original members of Obama’s cabinet, along with Education Secretary Arne Duncan and Agriculture Secretary Tom Vilsack.

Republicans responded to Holder’s decision to step down with harsh assessments of his tenure, and gave a preview of the difficulties Obama will face in getting a successor confirmed.

“I will be scrutinizing the Presidentâ€™s replacement nominee to ensure the Justice Department finally returns to prioritizing law enforcement over partisan concerns,” Senate Republican leader Mitch McConnell of Kentucky said.

Holder made civil rights a cornerstone of his tenure, bringing a series of cases against local police for using excessive force, suing the state of Arizona over a law aimed at Hispanic immigrants and successfully blocking many state voter ID laws before the 2012 election, likening them to Jim Crow-style poll taxes.

He visited Ferguson, Missouri, last month, promising a Justice Department investigation after the shooting death of a black teenager by a white policeman led to violent clashes with police.

While Holder has no immediate plans once he steps down, a Justice Department official said, he has told friends that he wants to find a way to help restore trust between law enforcement and minority communities.

Holder built a name more on the people he did not prosecute than on those he did, which is unusual for an attorney general.

Holder had previously signaled his plans to step down by the end of the year, and the Justice Department said he finalized his decision at a White House meeting earlier this month.

Holder was a natural choice for attorney general after campaigning for Obama in 2008, when he took on the sensitive job of helping to vet Obama’s choices for a vice presidential nominee.

His resume included Ivy League degrees, a job prosecuting corruption and a judgeship in Washington. Holder served in the Justice Department’s No. 2 job under Democratic President Bill Clinton.

The Senate confirmed him on a 75-21 vote in 2009, reflecting some Republican uneasiness about Holder’s liberal views and about his role in Clinton’s pardon of fugitive financier Marc Rich in January 2001.

Holder quickly reassured Republicans when he dropped the Justice Department’s corruption case against Ted Stevens, a former Republican senator from Alaska whom lawmakers had sympathy for. Prosecutors in the case improperly withheld evidence from Stevens’ defense lawyers.

The honeymoon began to fade during Holder’s first month in office in February 2009 when, in a speech on civil rights, he said America was acting as a “nation of cowards.” Critics denounced the comment as not sufficiently patriotic.

Later, he infuriated Republicans when he reopened a criminal investigation into the CIA’s use of waterboarding and other harsh interrogation methods – the same probe that ended with no prosecutions. Many Republicans thought the CIA’s actions were defensible and legal.

Holder’s battles with Republicans reached a peak in 2012 when the Republican-led House of Representatives voted largely along party lines to find him in contempt for withholding documents from them.

Obama claimed privilege over the documents about how the Justice Department responded to revelations about a botched anti-gun-trafficking program along the U.S.-Mexico border known as Operation Fast and Furious.