The first episode of the much anticipated ‘Alif’ is out and people have been flooding social media with praise! More specifically, Sajal Ali is receiving endless compliments on her acting in the new drama Alif.

The drama is basically showing the actress Sajal Ali who is trying to make it into the acting business while Hamza Ali Abbasi is a director. Abbasi’s character appears to be strict as he spend a considerable time in the entertainment industry; his beliefs got tainted. Moreover, Sajal’s character just doesn’t allow him to get away with his toxic ways. So, she is portrayed as a strong woman that just wouldn’t bend for the negative industry. It is a role that can inspire a lot of aspiring actresses and women in general. 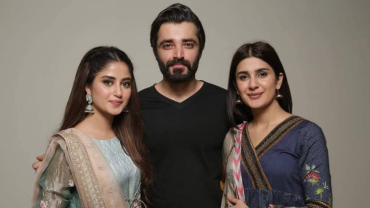 As the first episode released, the drama has been trending all over social media especially Twitter. People decided to compliment the theme, cinematography, and the catchy acting within the drama.

Moreover, many users have been praising Sajal’s focused yet natural acting that blended well with her role. Not to mention, the religious touch in the opening scene of the drama had people gasping in awe. Users are also taking the time to realize how well the two actors compliment each other. It is as if they have been on the screens together for years. Their chemistry appears to be untouchable.

Even though, the above already explains the opinions that people have had for the drama. The main thing that people are retaining their focus on is Sajal Ali’s acting in Alif, which is surpassing her acting skills in other dramas. She adjusted in her role so well that people believe any other would not have been able to execute it this well. Here are some of the best tweets that talk about her impressive acting skills:

This user worded it correctly for all the Sajal Ali fans!

Are you saying this is a Sajal Ali hype account? Well you are absolutely right. Here we hype and stan our Chota Don Gundi Baji the Bouncer aka the actrice extraordinaire pic.twitter.com/ZraRZygoQB

Some believe that Sajal is getting more praise because of her excessive screen time, but most of Twitter has simply been appreciating her skills. Though, there have been plenty of other users that think that the other members of the cast should be complimented as well. And of course that matters as well.

According to this user, it appears that Sajal Ali really set the bar so high that only she could challenge the standard that she herself set up.

Momina from Alif will surpass all the other characters that sajal has portrayed. NOW THAT’S SAJAL ALI FOR Y’ALL. She challenged the standard set up by herself only. #alif #MominaSultan #sajalaly @Iamsajalali pic.twitter.com/jPFZSqR8Fk

Some mention that her performance was beyond any words!

In the end, this tweet sums up the reactions of most people that got to watch the latest episode of the new drama.

Hopefully Alif keeps up with this hype and gets to excite the audience with even more dramatic yet appealing scenes. Currently, it seems that Alif really is craving its name in history, considering how it didn’t disappoint even after the constant expectations.

What do you think of the situation? Do you think that this drama would be able to satisfy the expectations of the audience with its next episodes? Share your thoughts using the links below.

Sania’s Sister Anam Is Marrying Azharuddin’s Son And Mirzas Are Really Excited About It!
Gaddafi Stadium Will Turn Pink As Part Of An Awareness Campaign
To Top