This Ongoing Twitter War Between Adnan Sami And Pakistanis Is Actually 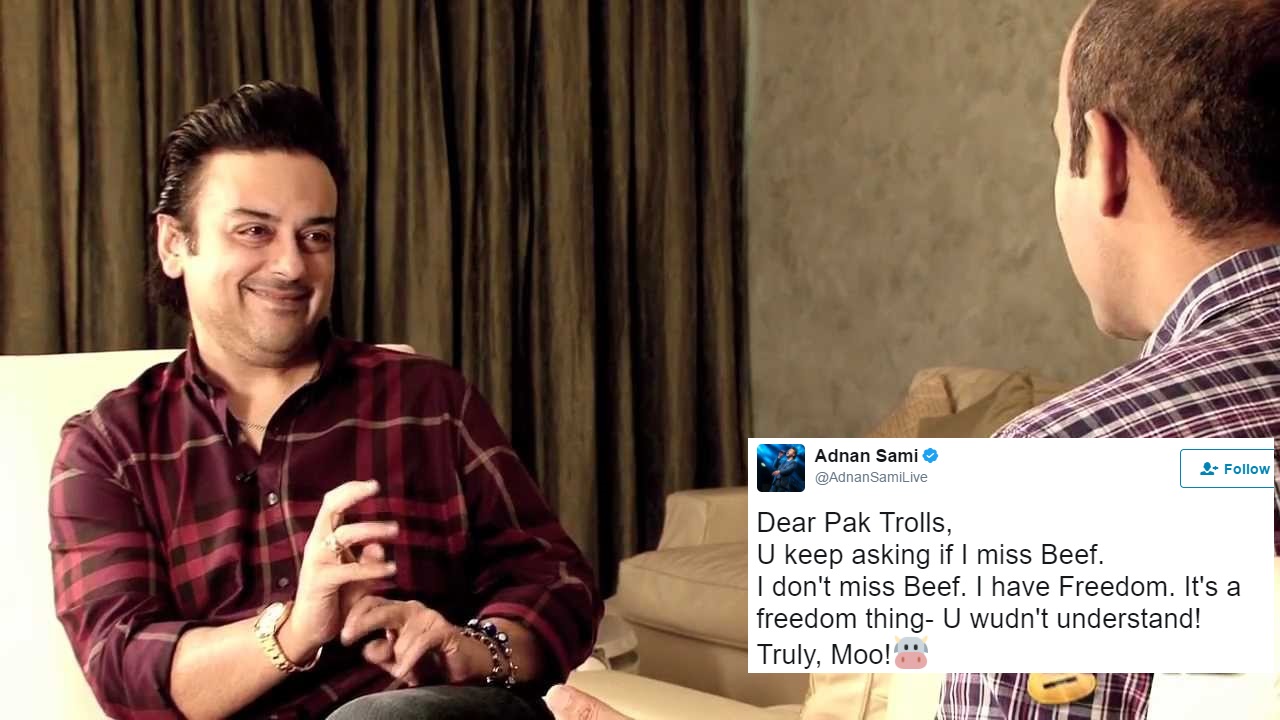 Pakistanis, generally, consider Adnan Sami as a traitor. To seek achievements in his career, son of a Pakistani diplomat, bureaucrat and soldier left his country when the arch-rival India offered him a deal, which was to abandon his Pakistani nationality.

While the singer was born in the United Kingdom, his mother was an Indian. Adnan first went to India to work on his career 18 years ago. In 2016, his request for Indian citizenship came through (after first rejection) while the Pakistani authorities kept delaying his passport renewal.

Since his shift to India, Adnan Sami, on numerous occasions tweeted how being an Indian makes him proud.

“My belief in destiny was absolutely well-founded because I was born on August 15 — look at the irony, it could have been 14th, but no, He made sure I was born on the 15th of August — so that was the hint number one.” – Adnan Sami in an interview for Times of India.

He Continues Showing His Support For India – Even During The Times Of The Awful Surgical Strikes!

Dear Muslim Clerics, U all claim music is haram in Islam? This is Saudi Arabia. This is song n dance by its Royalty! Whr r ur fatwas now?!?? https://t.co/sRUyba9qEZ

Had Adnan Sami known that Saudi Arabia doesn’t ‘own’ Islam, arguing with this guy would’ve been an option… but for now? Nah!

Oh And Not To Forget The Recent Snapchat Fiasco When Pakistanis Bashed Adnan Sami WAY Too Much!

*Stunts you make when you try to stay relevant*

Anyway, moving on. Yesterday, the singer pointed out Pakistanis who, without any fear whatsoever, love picking Indians on how they are not allowed to eat beef in their country, made him a target too. Here’s what Adnan Sami tweeted:

Dear Pak Trolls,
U keep asking if I miss Beef.
I don’t miss Beef. I have Freedom. It’s a freedom thing- U wudn’t understand!
Truly, Moo!?

To this tweet, Pakistanis interacted in their own way:

Putting It All In Perspective

@AdnanSamiLive Woah…! This isn’t merely for the trolls, you’re targeting all Pakistanis here, even your fans. I guess you’d be losing thousands today.

Do you talk about freedom, Mr. Adnan Sami? Pakistan gave you the freedom of becoming a citizen of another country. Perhaps you need to reflect on the statements you make in public because everyone is aware of how you ‘begged’ to receive the Indian citizenship, which was first denied.

Never forget where you come from, Adnan Sami.