A mother of three months old twins and a two-year-old son wants to reunite with her Pakistani husband as he is stranded in Pakistan amid COVID-19. Sanjana lives in Dubai and has been pleading both the governments to help her.

Sanjana, who is originally from Kenya, said that she had met her Pakistani husband Hussain in Dubai and they got married in Pakistan in 2017. According to Sanjana, her husband went to Multan on March 11 to sell some properties.

“I had a difficult premature delivery with the twins and that led to some complications and hefty hospital bills,” Sanjana added.

‘Went to Pakistan to arrange money’

With newborn twins in their mother’s care, the father set out to arrange the money only to be stranded in Pakistan amid COVID-19 lockdown. 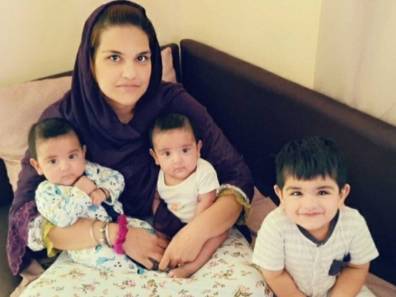 “Please help my precious twins reunite with their father stranded in Pakistan,” Sanjana made a desperate appeal.

While talking to Gulf News, Sanjana further said that she has done everything she can for her husband’s return. As he is the only bread earner of the family, the brave mother is now struggling both mentally and financially.

‘Left when the twins were 1 month old’

“So far I have applied twice on the official website to take travel permission for my husband. My first request for travel permit was rejected in April while the second request made on May 23 is still pending,” she said.

“I appeal to the concerned authorities to bring my husband back as flights have also resumed from Pakistan.” 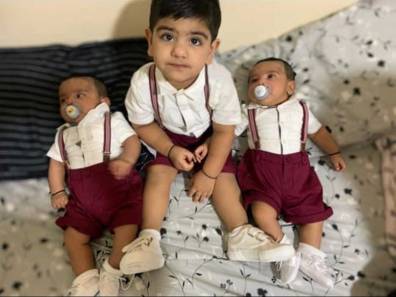 Further, Sanjana stated that her husband was now facing termination after his company had given him multiple warnings.

“I fear that my husband might lose his job if he did not return this month. His company has given him a warning that he will be terminated if he does not come back this month,” she added.

“My husband has not been paid for the last three months,” said Sanjana. She has been borrowing money from his friends and relatives to survive.

Sanjana’s husband was born in the UAE where his mother is a national. She said that his mother had been helping her, but she herself had health issues. She has also been under a lot of stress as her son is still stranded in Pakistan.