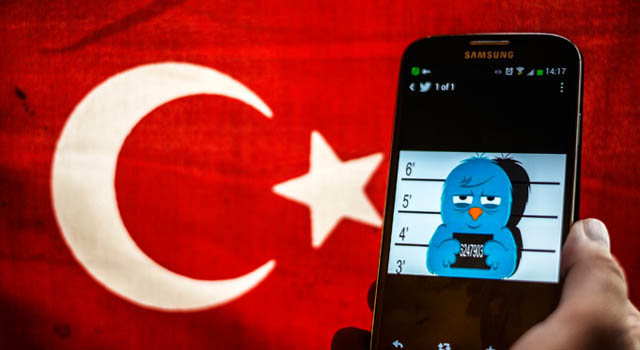 A Turkish journalist was sentenced Monday to 10 months in prison for a tweet that was critical of Prime Minister Recep Tayyip Erdogan, a comment that he has described as a typing error.

Ã–nder AytaÃ§, a former police academy instructor who later became an influential columnist for Taraf, one of Turkeyâ€™s primary opposition newspapers, is also a member of the GÃ¼len movement, which used to support the Erdogan government but is now against it. The tweet in question was posted in 2012 after Erdogan announced he would be closing down private schools that the GÃ¼lens operate.

AytaÃ§ tweeted a link to a news story about the announcement with the comment: â€œclose them down my chief :-)â€ (â€œustam,â€ or â€œchiefâ€ being how Erdogan supporters refer to the prime minister).

The problem, according to Eynep Tufecki, an assistant professor at the University of North Carolina, is that AytaÃ§ attached the letter k to the end of â€œustam.â€

â€œAytaÃ§ added a letter, â€œkâ€ to the word which transforms the end portion of the word to an off-color abbreviation, in effect writing â€˜eff off.â€™ Erdogan sued under Turkeyâ€™s restrictive defamation laws which make it a crime to insult â€˜public officials during the course of their job,â€™â€ she wrote on Medium.

AytaÃ§ later claimed the simple â€œkâ€ was nothing more than a typo, and some observers have wondered if he would have been prosecuted if not for his nearly 200,000 Twitter followers. Yet average citizens were prosecuted for tweeting supportive messages when the Gezi Park protests were underway, and the Erdogan administration has a long history of trying to silence Twitter.

AytaÃ§ received a suspended sentence, although it is not clear if his time behind bars was delayed or rendered meaningless. Because of the parameters of the law, though, the sentence he was given is not eligible to be equated into a fine or community service.

â€œIâ€™m quite a big man,â€ he told the Daily Dot. â€œMy fingers are quite big as well. Sometimes you canâ€™t properly hit all the letters.â€

Whatever the case, the punishment has already been condemned by international rights activists.

â€œIrrespective of what [the tweet] says, nobody should be sent to prison for defamation/libel/insult,â€ said Andrew Gardner, a Turkey researcher at Amnesty International.

Earlier this month the Turkish government convinced Twitter to block two accounts that leaked documents and phone calls embarrassing to the prime minister. Twitter declined to provide details about the users, although a cursory search of the two accounts â€“ @Haramzadeler333 (which translates to â€œSon of Thievesâ€) and @Bascalan (â€œPrime Thiefâ€) â€“ proved they were indeed listed as â€œwithheld.â€

Erdogan previously sought to block YouTube and Twitter in March, after audio surfaced of a sensitive conversation between Turkish leaders regarding the security situation in Syria. The ban was instituted in the weeks before municipal elections.

The Twitter blackout was lifted on April 3, once the countryâ€™s highest court decided that the government rule was a direct violation of free speech. Two other rulings declared that YouTube should be unblocked for the same reason, although the video site is still unavailable to Turkish audiences.

Meanwhile Turkeyâ€™s Hurriyet Daily News reported Monday that AytaÃ§ was briefly detained in Ankara on March 29 when government prosecutors reportedly suspected that he had been involved with leaking the audio about security in Syria, prompting the major social media crackdown. Prosecutor Tekin KÃ¼Ã§Ã¼k told Hurriyet officials had the â€œimpressionâ€ AytaÃ§ was involved in the disclosure and that the journalist was released after testifying he was not.

Turkish President Abdullah GÃ¼l said the leak was an â€œact of espionageâ€ and vowed that those deemed responsible would be shown â€œno tolerance.â€