Turkey has turned the Hagia Sophia museum into a mosque after the ruling of the court. President Recep Tayyip Erdogan proclaimed the verdict. The museum has built around 1500 years ago as an Orthodox cathedral.

However, in 1453 after the Ottoman conquest, the cathedral was converted to a mosque. Moreover, In 1934 it became a museum and is now a Unesco World Heritage site.

Besides, Muslims across Turkey wanted to turn the museum into a mosque; however, with the secular opposition, they were unable to do that. 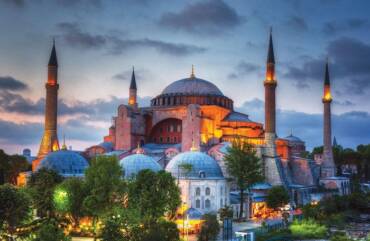 It is pertinent to mention, just an hour after, Erdogan made his announcement. Moreover, Turkey brushes aside warning of not to alter the state of such monuments.

The decision, Erdogan signed said, “The decision was taken to hand over the management of the Ayasofya Mosque. ..to the Religious Affairs Directorate and open it for worship.”

In addition, the Council of State, the top administrative court of Turkey, said in its ruling: “It was concluded that the settlement deed allocated it as a mosque and its use outside this character is not possible legally.”

Moreover, it said referring a decree signed by Ataturk, “The cabinet decision in 1934 that ended its use as a mosque and defined it as a museum did not comply with laws.”

Also Read: 37 Most Stunning Mosques Around The World

A historical moment.
First Adhan in world’s largest #HagiaSophia. Museum is turned back into mosque.This is real achievement of Muslim Ummah.

The azaan brought tears in many eyes. Moreover, the azaan brought back memories of the glorious Muslim past. Furthermore, hundreds of people assembled outside Hagia Sophia to celebrate the verdict. A teacher Osman Sarihan said, “Those who built this did it to worship God as well.”

He added, “Thank God today it reverted to its main purpose. Today God will be worshipped in this mosque.” Besides, In Ankara, AK party members applauded the decision.