Tuba Aamir Just Jumped In The Fight Between Veena/Sania And She Is Now Acting Like Aamir Liaquat!

The recent Pakistan VS India match which took on Sunday surely disappointed many Pakistanis and the outrage on social media absolutely bizarre! Our cricketers were severely bashed and trolled for various reasons. One of the reasons was being unfit and the second was when the Pakistan cricket team was spotted smoking shisha along with Sania Mirza. For some, it was indeed very surprising and even raised a lot of questions.

Things got serious but people seemed to be enjoying all that was going on!

It started off with our famous TV actress and host Veena Malik trying to take a jab at the Indian tennis star, Sania Mirza. But little did she know her tweet would backfire and Sania Mirza would shut her up straight up. Veena Malik tweeted Sania Mirza by questioning her parenting skills after the pictures of her at a shisha place had gone viral. 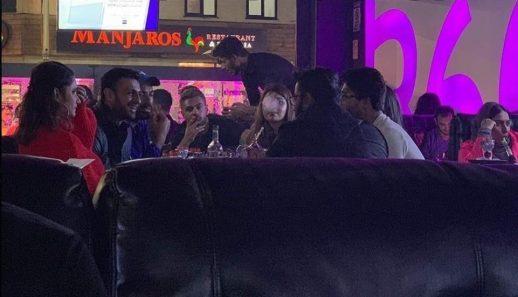 Veena’s tweet was actually pretty harsh! Have a look! It was literally mom vs mom. Lol!

Sania, I am actually so worried for the kid. You guys took him to a sheesha place isn't it Hazardious? Also as far as I know Archie's is all about junk food which isn't good for athletes/Boys. You must know well as you are mother and athlete yourself? https://t.co/RRhaDfggus

Sania Mirza, being a mom herself couldn’t resist replying back and literally owned Veena Malik!

Veena,I hav not taken my kid to a sheesha place. Not that it’s any of your or the rest of the world’s business cause I think I care bout my son a lot more than anyone else does 🙂 secondly I am not Pakistan cricket team’s dietician nor am I their mother or principal or teacher- https://t.co/R4lXSm794B

Considering all that had happened, Tuba Aamir, Aamir Liaquat’s second wife, too, jumped on the bandwagon and took a jab at Veena Malik for lecturing Sania Mirza on her dressing and what not when she wasn’t supposed to, that too on social media in front of thousands of people.

And here’s what Tuba Aamir replied to Veena!

Shaming someone based on what they wear is extremely low. You changed for yourself and you don’t owe answers to anyone. We all are striving to get better but are so unwelcoming when others make progress. Keep going and ignore the rest!

Yup, these cat-fights are now becoming too common and far as the awaam is concerned, the majority of them are sitting there and enjoying these meaningless arguments. We hope this settles down and people stop judging each other so much.

What do you think about Tuba Aamir’s tweet? Who would you want to support here? Let us know in the comments below.

A Young Man Lost His Life After Friends Drowned Him In A Pool In Punjab And They Should Be Punished!
Meet Amjad – A Rickshaw Driver Who Worked To Educate His 6 Daughters And Today One Of Them Goes To IBA!
To Top