Here's How Trump's Ban On Muslims Is Uniting Everyone Worldwide

Chaos and uproar in the hearts of many, Trump’s decision of banning Muslim-majority states from entering the United States of America is not only taking the social media by storm but is also deeply inflicting on the targeted masses present in and out of the USA.

It was no surprise that Donald Trump, the newly elected president of the USA would take racial steps as soon as he formally gets into power. The racial hate that was seen across the USA as soon as Trump won the presidential elections depicted a lot of the possible American mindset, fearing the minorities the most. Home to 319 million citizens (out of which 134 million citizens fall under the umbrella of minorities), the United States of America seems to be ruled in an arbitrary, biased manner now. 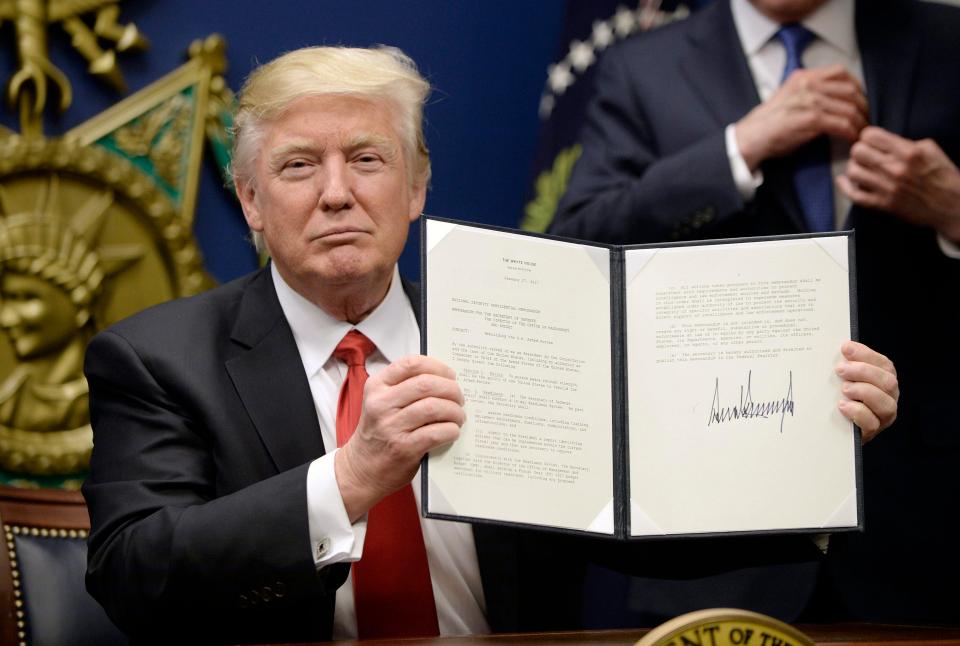 On Friday the 27th of January 2017, Donald Trump announced the ban of 7 Muslim-majority states from entering in the USA. These countries include:

Ban on entering for 120 days and indefinitely on the Syrian refugees, the order also detains US visas from these listed 7 countries. As radical as the decision is, Trump definitely did not think it through as even the United State’s court is partially ruling against this order.

It took Trump just one week to suffer his first loss in court. Let’s make sure he has plenty more. #MuslimBan #RefugeesWelcome #NoBanNoWall

However, just the order alone is shattering the homes of many, especially those immigrants and refugees who flew out of the country as there are high chances they won’t be able to enter the soils of USA for a certain amount of time.

The only positive thing about this ban is how people from all around the world are uniting against the order passed by Trump. Not only Muslims but even people practicing other religions are speaking against the order. The Americans protested in the light of this ban yesterday as well. The Americans, including both the Muslims and non-Muslims, is definitely showing how strong USA can become during situations like these.

Salute to all non-muslims voices against #MuslimBan, You restored my faith in humanity. #NoBanNoWall pic.twitter.com/AWimQxRDM0

This Is How Trump Is Making America ‘Great Again’

Makeshift cafe at #SFO as everyone settles in #MuslimBan pic.twitter.com/jSpNLu5sSv

The #MuslimBan will be remembered as one of the lowest points United States history. No longer the land of the free.

The Professor At Yale University Is Separated From His Family

This man is a Professor at Yale University. His wife and new born are now separated from him due to the #MuslimBan. pic.twitter.com/Q0Z6PHkwT5

Saying This Matters To Many

I live in Jackson, Mississippi. I do not have a single Muslim friend. I wish I did. I would hug them & protect them. ????#MuslimBan is not ok.

While Trump Is Busy Building A Wall And Stopping Immigrants, Canada Welcomes Everyone!

To those fleeing persecution, terror & war, Canadians will welcome you, regardless of your faith. Diversity is our strength #WelcomeToCanada

Twitter is built by immigrants of all religions. We stand for and with them, always.

“Give me your tired, your poor, your huddled masses yearning to breathe free.”

Except you. Not you. #MuslimBan pic.twitter.com/UN4G7v1roG

And In Conclusion, a Sigh of Relief For Now

Thank you @ACLU. Thank you. Trump’s immigration ban is temporarily disabled. Donate to @ACLU. Something tells me we’ll be needing them. https://t.co/VpbKP7TtG0

It is a relief to see how Americans and walking with Muslim immigrants and standing with unity. Here’s to hoping one of the most powerful countries in the world doesn’t blow due to the immature decisions made by the newly elected president.

Another Hot Pakistani Bachelor Goes Off The Market – Azfar Rehman Gets Married!
Here’s What Will Happen If Men Were To Be Wedded Off As Compared To Women!
To Top