In other news, Donald Trump’s party candidate took to twitter saying, they should find all how many death threats they would get if they tear down any of Prophet Muhammad’s (PBUH) statues. Another stellar case of speaking about things you have no knowledge of.

Statues around the world are defaced recently as part of the Black Lives Matters protests that started from the US. Trump’s party candidates continue to make a fool out of themselves as they dish out such absurd statements only to stand out in their leader’s eyes.

In a now-deleted tweet, Angela wrote, “Threaten to tear down statues of the Prophet Muhammad (PBUH) and see how many death threats you get.” Little did she know, Islam prohibits statues. 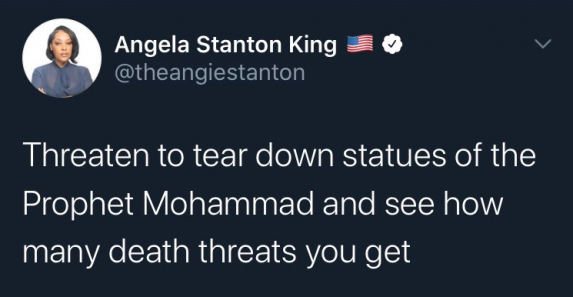 As soon as she made this declaration, many were quick to school her for not knowing what she is talking about.

A Twitter user was quick to point out Miss Angela’s ignorance.

First, you should try to count the statues of the Prophet Muhammad and see how many you get. https://t.co/62C16dhzL6

Many also pointed out that should she find any ‘statues’ Muslims would be the first in line to help her break them down.

As a Muslim, I would HAPPILY help tear down the statues of the Prophet Mohamed.

Ignorance is not always bliss

As politicians, one needs to have a sane mind and a bit of background knowledge of any topic they are about to touch. Then again, Trump along with his party leaders rarely exercise ‘common sense’.

One user wrote, “They clearly haven’t done more than 5 seconds of research on the religion they’re attacking. I guess I shouldn’t be surprised. They don’t spend more than 5 seconds googling the civil rights act and the realignment of political parties since then.”

Another American Christian wrote, “Isn’t it considered sacrilegious to depict him in any form? Muslims would be the first ones calling for a statue to be torn down! Lol”

If you tried to BUILD one you'd probably get death threats!

She's not so smart is she?

You'd think they'd use GOOGLE before they say these things? Apparently that is too much to ask for.

She's a trump supporter. They get all their "facts" from Trump news station. 🤣 pic.twitter.com/h8tgXJDirJ

🤣 Angie's not the sharpest knife in the drawer, is she?

Love the kneejerk, narrow view of “You tore down a thing I like! Now I wanna tear down what you like!” without having the capacity to understand the galaxy-sized ‘Why’. This is a classic example of inbred racism and white supremacy.