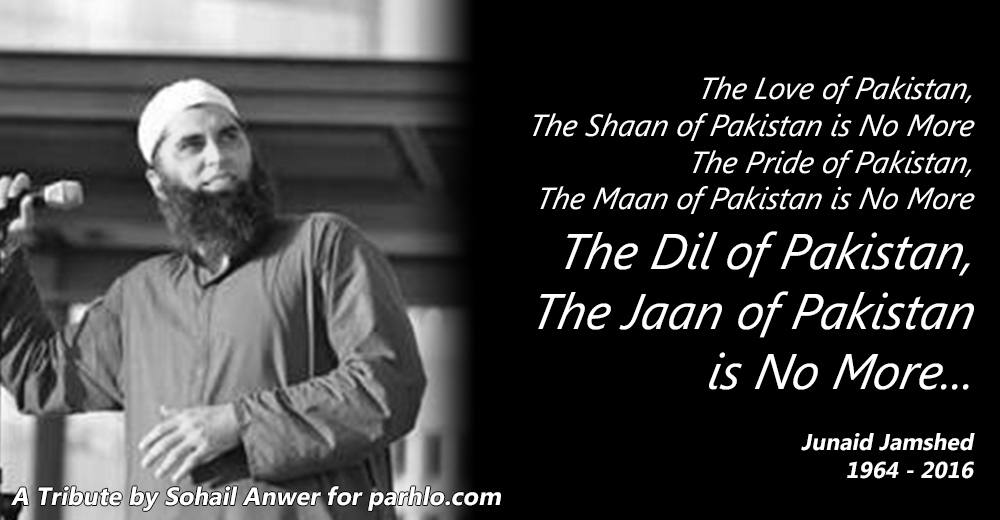 Patriot to the core – the guy whose voice mesmerized millions in the last decades – be it Islamic or Nationalistic – the guy is no more. He cried for Pakistan. He left us all crying. The guy, the person loved by all, the heart made of nothing but love and sincerity, is no more. The Dil of Pakistan – The Jaan of Pakistan is no more. Junaid Jamshed is no more.

In a devastating plane crash that killed more than 40 people, Junaid Jamshed and his family also lost their lives. He was traveling to Islamabad from Chitral on a PIA flight on Wednesday evening. The news has put many across the world in shock because Junaid Jamshed’s love was not limited to any borders.

There has been an outpouring of grief, sadness, shock and many other such emotions on the news of Junaid Jamshed’s sad demise. And why would it not be that way? All he had for everyone was nothing but respect. Even those who abused him, he never replied with abuse. He was a pure example of humanity, compassion, and love – the core teachings of Islam.

Junaid Jamshed left his music career at its peak – he left that career when he was getting huge offers – just to spread the teachings of Islam and for the last many years continued to do so. He traveled around the world in doing so.

Junaid Jamshed’s love for Pakistan is unquestionable. Apart from giving one of the greatest hit of all time, Dil Dil Pakistan – he was the person who stood for Pakistan whenever the country needed him. Be it a tragedy where he was unable to control his emotions and cried on national television or be it a national celebration – his emotions proved how Pakistani he was. Don’t take my words for it, watch this:

Junaid Jamshed, you will always live in our hearts and yes, Pakistan will always be Zindabad Insha’ALLAH.

Having personally met Junaid Jamshed, I have nothing but fond memories of him. What a great soul he was. I asked him of his personal contact and he willingly gave me that without knowing who I was. It happened during an event in Karachi where he was there as the guest and many like me were part of the audience. He allowed many to take selfies with him, gave autographs, even though he was running late for his next appointment. Such down to earth person he was.

His departure from singing towards the cause of Islam gave him a new found admiration. His respect for all his friends from his past singing career and the new ones he made during the cause of Islam made him a bridge between the two opposites. He was indeed much bigger than how he presented himself.

Tributes for Junaid Jamshed aren’t ending and in this state of shock, understandably, many are unable to find words to praise that legend. Here we share with you a few posts among thousands as people continue to share their sentiments on this devastating news.

Every soul shall taste death.

Junaid Jamshed will always have a place in the heart of every Muslim. May Allah grant them paradise.#PK661

Request to TV channels- Pl don't show Junaid Jamshed's music life that he had left many years ago. Remember him as a preacher of Islam.

Last azaan given by Junaid Jamshed in Chitral #PK661 https://t.co/Z0oCiM07Ac

Please don't show #JunaidJamshed's music life that he had left for good many years ago. Remember him as a preacher of Islam.#PK661

Even people across the border had nothing but praises for our legend.

I met Junaid Jamshed in June this year with @wasimakramlive . He was extremely courteous and hospitable. And he sang that evening!

Not only was he a patriotic, compassionate and a lovable human – he was someone who took the issues of Pakistan seriously and instead of just complaining, the guy didn’t shy away from taking practical steps to eradicate them. Recently he made his responsibility to clean Pakistan when he became part of the Clean Karachi campaign.

With a flourishing brand under his name; money was never the issue for Junaid Jamshed. Yet that didn’t make him arrogant neither did it stop him from doing social work for Pakistan. We are short of words in his praise and no words can be enough to define the great person Junaid Jamshed was. Truly, the nation of Pakistan has lost a gem…

“We don’t want anything from you, only your daughter” – They Say While Expecting Dowry
Cashing in On Junaid Jamshed’s Death Shows Ruthlessness On The Part of Marketers
To Top