Prime Minister Imran Khan’s vision of a Billion Tree Tsunami across Pakistan officially begins today. In a bid to control climate change and look towards a greener Pakistan, millions of trees are to be planted throughout the country.

However, on the first day of the drive, unforeseeable circumstances were seen in the Bara Sipah Mandi area of Khyber. Only a few hours after district administration and forestry officials planted hundreds of trees in the area, locals stormed the lands and dug out the planted trees.

In a video that has been going viral on social media, the incident can be seen very clearly. Dozens of young men and boys can be seen digging out the freshly planted trees with shovels and their hands.

As per reports, the locals have said that the government planted the trees on their land without permission. On the other hand, government officials say that they had taken permission from the owner of the lands. In addition, it is being understood that the lands were already disputed between a local tribe. Moreover, the permission given to the govt to plant trees was initiated by one party only.

Due to the faulty approval, locals took matters into their own hands and decided to pull out all planted trees. They have stated that nobody from the district administration or the forest department took prior approval for planting these trees.

Analysts have stated that the party that had given approval for plantation, wanted to cement their mark on the land with the help of the government. These trees, which are funded by the public’s money, have now gone to utter waste. 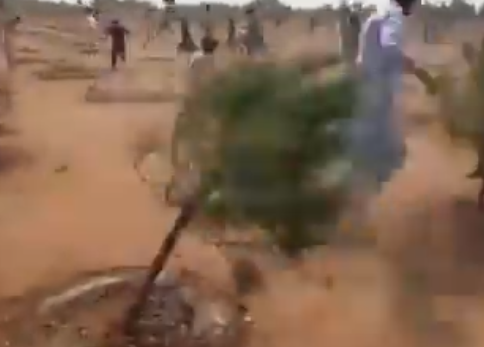 In addition, this unprecedented incident has somewhat hindered the excitement for the Billion Tree Tsunami plantation drive. Moreover, it is understood that the government will not take action against the people involved in the incident.

On the other hand, the plantation drive seems to be in a good swing in other places. Even in KPK, people have welcomed the plantation drive. However, this incident serves as a reminder that there is no room for a mistake from the govt’s end in this initiative.

Trees have a great impact on the weather. These are the steps we need to take to ensure our children are in a better state than us.