This Transgender Is Showing Mirror To Our So-Called Muslim Society

A new episode of The Centrum Media Originals that has recently surfaced on social media platforms showcases a thoughtful reality of our society. Presently, Muslims are bifurcated in multiple sects and have lost the pathway of one true deen – Islam. In this scenario, a transgender has logically commented on sects and religious principles and with capitalist and class-based society we live in.

There are no sects among Transgenders

“You people say (transgenders) are non-religious people,” said a transgender during an interview in the series of TCM.

Do you Know? Being A Muslim, Dividing Yourself Into Sects Is Un-Islamic

The transgender then advised scholars and said, “Before teaching us religion, they should first think that they are divided in sects; and the ones who are living together they question them that why don’t you have any sect.and why arent you are divided in sects?”

They make them their slaves; then because of the fear that the poor people might get united so they use sects to divide and rule them. So, they (poor people ) keep fighting each other. While the big guns don’t kill each other. Rather they do ‘dialogue’ and meetings, to solve their problems with mutual consensus. While the poor people who are in slavery keep fighting with each other and keep killing the people of opposing sects, saying don’t consider them human beings and don’t let them live.” 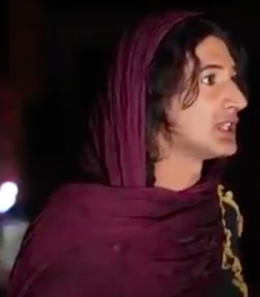 Comparison of animals with humans

“So, if from this planet everyone does this then who is going to be left here to live?”, asked the transgender. She added, “If you observe the animals in groups as Allah has said that ‘there are signs everywhere for those who have the vision to observe’ so, if we look around towards animals, instinctively they live in groups. Have you ever seen them fighting with each other due to their sects? Have you ever seen a dog killing another one? Or a dog is saying another one that I am richer than you? Or even saying that I am taller than you? They all live together in groups. Thus, the reason to tell this all is that species live in a group; so human species should have lived in a group too.”

In a nutshell, the transgender draw the real picture of this society. She explicitly explained the scenario and his philosophical thoughts. Besides, the intellectual transgender advised the society and religious scholars. Moreover, she gave all his analyses based upon reasons; talked more efficiently than most of the eminent scholars.

Lockdown Has Forced The Underprivileged To Live On Streets, Who’s Responsible?
With Over 500 Deaths, Govt Planning To Ease Coronavirus Lockdown Soon
To Top