The Dark, Intense Trailer Of Sarmad Khoosat's 'Zindagi Tamasha' Has Got Everyone Waiting For It!

In sheer efforts of making Pakistani talent go beyond international borders and stun the world with its excellency, the revival scenario sure brought home some magnificent achievements. The exceptional content being produced in Pakistan relies on a bunch of talented minds working selflessly to build up the national cinema and create a worthy mark globally. Among such intelligent, a famous artist of the country’s show business industry Sarmad Khoosat is coming back again with another masterpiece “Zindagi Tamasha”.

Sarmad Khoosat ready to showcase his artistic intuition once again!

As the Pakistani dramas already got hype among the international audience, national filmmakers are busy fitting their brilliant ideas in the cinema frame. Earlier this month, Kamal Khan directed “Laal Kabootar” was selected as an official entry for the Oscars to represent Pakistan and last week, the protagonist Ahmed Ali Akbar won the best actor award at the Washington DC Film Festival for the same movie. Recently, Sarmad Khoosat released the trailer of his soon to be launched venture “Zindagi Tamasha” and the digital awaam went totally crazy over it.

Perfectly penned and executed, the filmmaker shared the trailer on his official Twitter!

Previously, Sarmad Khoosat also played the lead in his widely acclaimed biopic “Manto” which was well-received by the critics as well as the general audience. Well, the recent trailer of “Zindagi Tamasha” was released in an official event at the Olo Junction in Lahore where Sarmad Khoosat was also present with his cast. Since last month, the posters and teasers of the film were already being hailed all over the internet and the coming in of the final trailer just raised the excitement bar extremely high.

What is “Zindagi Tamasha” all about?

Being the first-ever movie to be made under the umbrella of ‘Khoosat Films’, “Zindagi Tamaha” will be portraying the dark aspects inherited in our society regarding the blasphemy laws being misused for personal gains. The story revolves around a man who is a professional naat reciter and the basic misconceptions that our mindful progression carries within. Shot completely in the city of Lahore, the most anticipated movie “Zindagi Tamasha” will be first premiering in Busan Film Festival of South Korea by the end of this week and later this year in Pakistan. 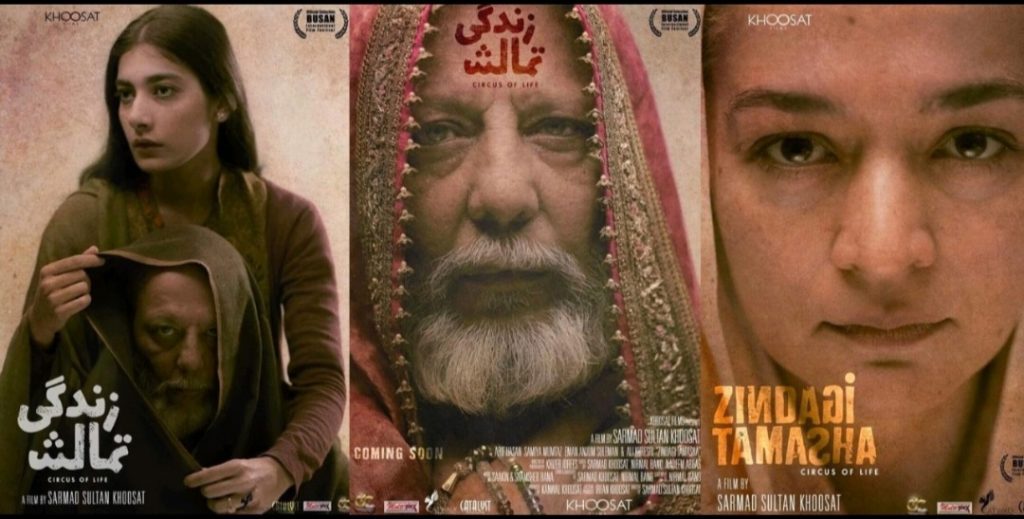 Thankfully, the cast is not filled with the same drama faces, the lead actors include Samiya Mumtaz, Ali Qureshi, Arif Hasan and now an actress Eman Suleman. Currently, social media is full of praises and best wishes for “Zindagi Tamasha” as Sarmad Khoosat comes is considered to be one of the best filmmakers Pakistan’s entertainment industry has. Be it any serial or a film, this talented brain has it all covered and perfectly knows what the desi society rituals are and how to give those neglected elements a story to base upon without offending any group.

Its definitely going to be huge!

All the support is with such talented individuals!

For all those complaining about Pakistani cinema being second-tier to Bollywood, this our chance to support thought-provoking films like these and create our unique identity in world cinema. Best of luck to @KhoosatSarmad!

Nothing less then ‘intriguing’!

Seems like the most important film after Khuda ke liye; and next level. Powerful, intriguing, sensitive. A milestone in meaningful cinema !!

An act of bravery and work of passion never goes to waste!

It is not easy to take up such sensitive issues of the society an portray them in such an effective way. Really looking forward to it.

What else can one expect from pseudo-liberals?

This is brave. Fatwa brigades are going to get triggered.

Taking the scripting narrative in the notice, seeing a fresh graduate of National College of Arts (NCA) write this well, Nirmal Bano showed the world what Pakistan actually holds. After Sarmad Khoosat’s “Manto” was screened at Mumbai and Yale as well, this production of Khoosat Films might become the most awaited movie of the year and it is also believed that the film will be an international release too.

What do you think of Zindagi Tamasha’s trailer? Let us know in the comments section below!