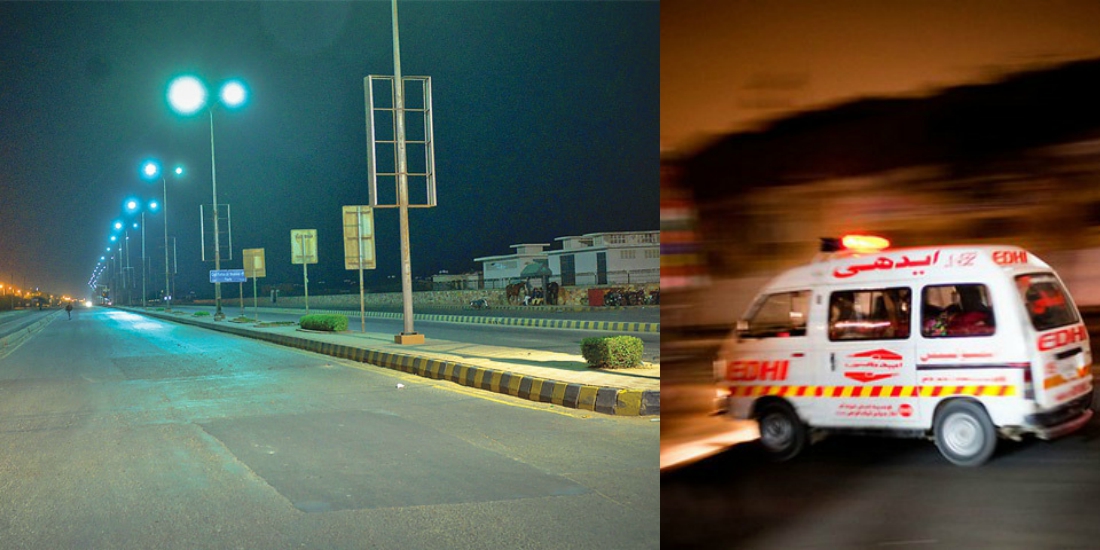 There have been tragic incidents in the past that have torn families apart and these incidents are now happening too often, nowadays. Such incidents just show how careless and irresponsible our society has become and how someone’s life means nothing to a majority.

Recently, a shocking accident took place which proves how brutal and inhumane we have become. It is sad to know that this is the society we live in and there are such people around us. Here’s the story that went circulating around on social media.

Sana was the wife of Ali Khurram Pasha who was crushed to death near Sea View on the night of 25th August. and here’s how it goes:

“As of today Fri, 25 August between 8:30 pm to 9:00 pm I was on my way to pick my brother up from Seaview apartments. I took the main sea view route which is partially dark at night due to bad street lighting thus when I came near Chunky Monkey I saw a girl aged 23-26 with her phone in the hand and earphones on, who seemed to be was on her way home after jogging on the sea front, was rushing in the opposite direction to cross the road as she reached the middle of the road suddenly a “White Toyota Corolla” Horning like a bastard passed me accelerating at a speed of 70kph to 80kph. Due to earphones on her ears she couldn’t notice the horns and headed towards the service lane slowly slowly and when she noticed the car heading towards her with no time to react got stunned in the middle of the road and seemed paralysed due to the shock and stood straight in her place, on the other hand the person driving the car or I must say an animal in an uncivilised body made no effort to save that poor soul and ran over her.As soon as the person ran over that girl he didn’t stop for a sec and ran away from the scene.

As this all happened within 5 to 10 seconds I went into a state of trauma for a while as I haven’t seen an incident of such level live. When I stopped my car the first thing that came into my mind was to cover her body up and call the ambulance. Her head seemed to be badly hit as within seconds her head and neck were covered in a pool of blood.

People from surrounding rushed to help, cars and bike stopped to provide a helping hand and police from the nearest police station came to have a look. A couple shouted in the middle “try to call her relatives for identification” and at that time I realized that a heartless scum had already stolen her phone without realizing how important that phone could have been at that moment.

We waited for 5 minutes and there was no sign of any ambulance so I decided to take her to the nearest hospital in my own car. I was accompanied by a police constable and headed towards the nearest hospital which came out to be Arif Defence Medical center at Khayaban-e-Bukhari.

Upon arrival, the doctor and her team refused to treat her without prior payment and we all were shocked by their response. How could someone go so down to be so humanless and insensitive, they didn’t even think for of a while that the person lying in front of her is fighting for her last breath and each second at that moment mattered for that soul. The doctors even hesitated to treat her even after we assured them to pay all the bills by yourself.

Everyone in the hospital started praying for her recovery from patients to the police constables and on the other side, I witnessed that inhumane doctor worrying more about her payment rather than the patient by confirming it again and again without realizing how critical her condition was. The doctor refused to treat her further by saying that she needs to be moved to Jinnah hospital and an ambulance was called. As the ambulance reached the hospital we heard the staff saying she had already expired.

We all were shocked by that sad news and were worried that how to identify her and contact her parents. As we went out with grief a staff member followed us and told us that we have to pay for the bandage which made me more anguish that how could someone be so selfish and inhumane. It wasn’t about money it was about moral, they had no shame in their eyes and sorrow in their heart they were just worrying about their Pkr 100 worth of bandage.

This incident showed me the ugly side of our society and the cruelty filled in everyone’s heart. I can’t stop thinking about her and the pain she went through in those 20 minutes. May her soul rest in peace and receive the highest level of Jannah by the will of Allah. I wish that Allah provide her family with the strength to bear the loss.

I would not only blame the driver of that White Corolla for her death but the person who stole her phone and the staff and doctor of Arif Hospital equally for the incident.

I want you all to pray for maghfirat for the departed soul and boycott Arif Defence Medical center.

It’s a request to everyone please be careful while crossing the road and take extra pre cautions, you might be confident with your body and movement but you never know how careless the person on the wheels is.

Today a foolishness of an humanless individual took away someone’s life and destroyed a family forever. Please be careful while driving a car as your one mistake can put someone’s life in danger.” 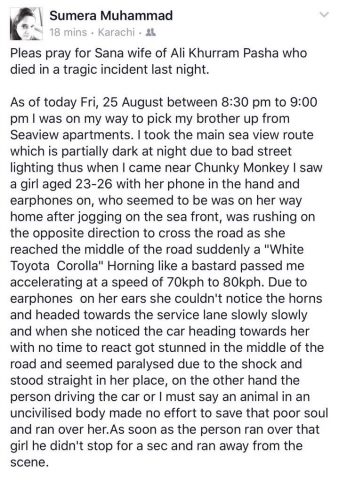 Now, this just proves how selfish we have become and it is a matter we should all look up to. How is it so easy for a person to just take someone’s life? How can we not focus on the responsibilities we have as civilians? Why okay for everyone to do whatever they wish to do, without considering the precious lives around us? Why have we become so inhumane?

For all the people behind the wheels: Please be vigilant at all times and remember, you’re responsible for the lives out there while you’re on the road. Take care of the speed limits and be cautious.