Pakistan cricket board had announced to host a series between Sri Lanka and Pakistan the previous month. After a lot of uncertainty and security concerns of the islanders the series is set to have its first match today, 27th of September. And the remaining two matches of the series will be on 29 September and October 2.

However to meet the security protocols ensuring a safe trip for the international team the Traffic police will be setting checkposts and blocking certain routes to the national stadium for the general public. The police have also outlined the routes that the commuters will be using to reach the stadium.

Here is the traffic arrangement or diversion plan has been provided to the public to guide them through the alternate routes that will be used during Pakistan vs Sri Lanka series. 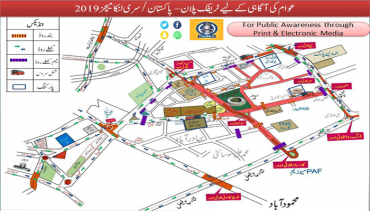 First things first, the general public coming to watch the match must bring their original ticket and CNIC along with them to get past the checkpost. Then the viewers are of the match are designated certain parking places where they are supposed to park their vehicles. Following are the parking arrangements for the match.

Routes To The Parking Places

Viewers coming from Drigh Road via Shara-e-Faisal will turn right to Rashid Minhas Road, then take a left turn from Millennium, park their vehicle or motorcycle at Gharib Nawaz Football Stadium from there a shuttle bus will take them adjacent to Bahria University Stadium Road.

Viewers coming from Liaquatabad No.10 can use the route of Hassan Square, that is by turning left from University Road. Then the viewers can park their vehicle or motorcycle at the Ground of Urdu University from there a shuttle Bus will take them adjacent to Expo Centre.

Read Also: Umar Akmal And Ahmed Shehzad Might Be Back In The Game For SL Series

Viewers coming from Safora can use NIPA and the ones coming from Sohrab Goth from the route of Gulshan Chowrangi will also turn left from University Road and park their vehicle or motorcycle at Urdu University Ground.

Viewers coming from Liaquatabad No.10 can also use this route if they wish to park their vehicle or motorcycle at Expo Center.

All kinds of traffic coming from Rashid Minhas Road shall not be allowed to proceed towards the Stadium and hence will be diverted towards NIPA, Askri-IV (Millennium), Drigh Road to Shara-e-Faisal or Millennium, NIPA to Safora Chowrangi or NIPA to Gulshan Chowrangi to Sohrab Goth.

All kinds of traffic coming from Nursery shall not be allowed to proceed Habib Ibrahim Rehmatullah Road towards the Stadium and hence towards Drigh Road Shara-e-Faisal, left turn Rashid Minhas Road, Millennium to NIPA.

All kinds of Traffic coming from University road shall not be allowed to proceed Stadium Road from New Town Chowrangi turning and hence will be diverted towards Jail, Shaheed-e-Millat or straight PP Chowrangi. Traffic coming to Aga Khan Hospital or Liaquat National Hospital will be permitted from New Town PS. People coming to view the match will be likewise permitted to enter from this side after their tickets have been checked.

All the viewers coming from Central, East, Malir, South, and West can use Lyari Express Way. Mirza Adam Khan Chowk, Mauripur Road both can be used up to Sohrab Goth.

Heavy vehicles shall not be allowed to proceed from Sohrab Goth to NIPA, Liaquatabad No.10 to Hassan Square, or PP Chowrangi towards University Road.

Parking of vehicles is prohibited on service roads or main roads.

In case anyone from the general public or commuters face any inconvenience, they have been advised to use the Traffic Police Helpline Rahnuma-1915 for guidance, where Traffic staff is available to assist them.

Furthermore, for updated information, they can tune into Sindh Police FM Radio 88.6 or the Facebook page of Sindh Police www.facebook.com/karachitrafficpolice

This Rider Went A Little Too Far To Help A Bunch Of Friends At Hyderabad Train Station!
Sri Lanka Captain’s Video Message Reminds The Detainment Of Indian Pilot Abhinandan
To Top