Trade Deficit Of Pakistan Reaches $31.8 Billion By Decreasing About 15.3% In FY2019|Parhlo.com

The government is trying to decrease the flow of import through various restrictions. The duties on the non-essential products resulted in fewer import bills. Now, the Pakistan Bureau of Statistics (PBS) mentions that the trade deficit had reached an amount of $37.5 billion within the year of 2017-2018.

Even though the value of dollar sees a significant increase yet Pakistan is not able to boost its exports. Moreover, the financial necessities cannot be fulfilled by reducing the import bills. According to a statement by analysts, “It has to jack up exports to at least double-digit to meet the gigantic external financing needs.”

Statistics Of The Trade Deficit Of Pakistan In 2019:

Additionally, exports went till $22.9 billion due to a decrease of 1%. The trade deficit seemed to be at $2.6 billion relating to a fall of 29.8% in June. The imports then saw a decrease of 13.4% month-on-month and the exports witnessed a fall of 18.3% in the month of June from $2.1 billion. These are the statistics provided by the Pakistan Bureau of Statistics (PBS). Not to mention, the import bills in FY2018 had been $60.7 billion. 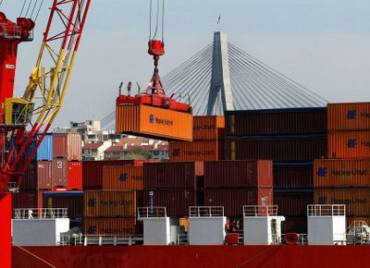 Currently, there are predictions regarding the growth of exports in the on-going year of 2019 as well as 2020. The International Monetary Fund (IMF) mentions a growth of about 8.2% in the exports within these years. Moreover, it seems that according to the IMF the account deficit is 2.6% of the GDP rather than 4.6% which was in the last fiscal year.

To determine this better and setting an assumption that will date till the year 2024, the IMF addresses within a report. They said,  “The current account deficit is expected to quickly adjust and narrow to less than 2 percent of GDP by FY2024,” to also further add, “Initially, import demand will be contained by tighter fiscal and monetary policies, while a gradual export recovery will take hold, underpinned by competitiveness gains from the real depreciation and new investment.”

Furthermore, there is a three-year loan agreement with the IMF to resolve the balance of payments. The government is taking measures like imposing regulatory duties on imported goods. And the imports are being restricted for the balance of payment and multiple currency practices (MCP). The IMF report further elaborates, “During the program period, they will not introduce or tighten exchange restrictions, MCPs, or import restrictions for balance of payments purposes (continuous performance criterion),”.

The people of Pakistan had predicted that such a change might occur due to the current government. Moreover, the Federal Minister of the National Assembly of Pakistan took to Twitter in the month of April talking about the trade deficit that happened in March 2019. He said, “The Trade Deficit of Pakistan fell by more than 37% in March 2019 over the same month last year. It is a very positive sign that the 5 years build up in external deficits have now started reversing sharply. Economic stabilization policies of PTI govt are bearing fruit”

What do you think of the situation? Is the Pakistani government taking full action towards the country’s economy? Share your thoughts!

After Ali Zafar, PM Imran Khan’s Nephew Claims Meesha Shafi Is Threatening Him With A #MeToo Scandal!
About 55 Chinese Companies Are Willing To Invest $5 Billion In Pakistan!
To Top