Clifton Beach Is Covered With Open-Needle Syringes Among Other Waste Putting Everyone In Danger!

Karachi’s Clifton beach has seen seasons of all sorts of garbage spreading far and wide, courtesy of the people that mindlessly litter. Unfortunately, even the fish like dustbins installed recently didn’t quite serve the purpose as they were mistaken for art installations instead.

These fish-like bins had to be removed afterward only to be installed again. However, a recent alarming situation that several people of Karachi noticed since two days finally caught the much-needed attention by the mainstream and social media after the wife of Wasim Akram, Shaniera Akram turned to Twitter to report with footages about the dangerous medical waste washing ashore; in hopes that the sleeping authorities of Karachi and Sindh will finally wake up. 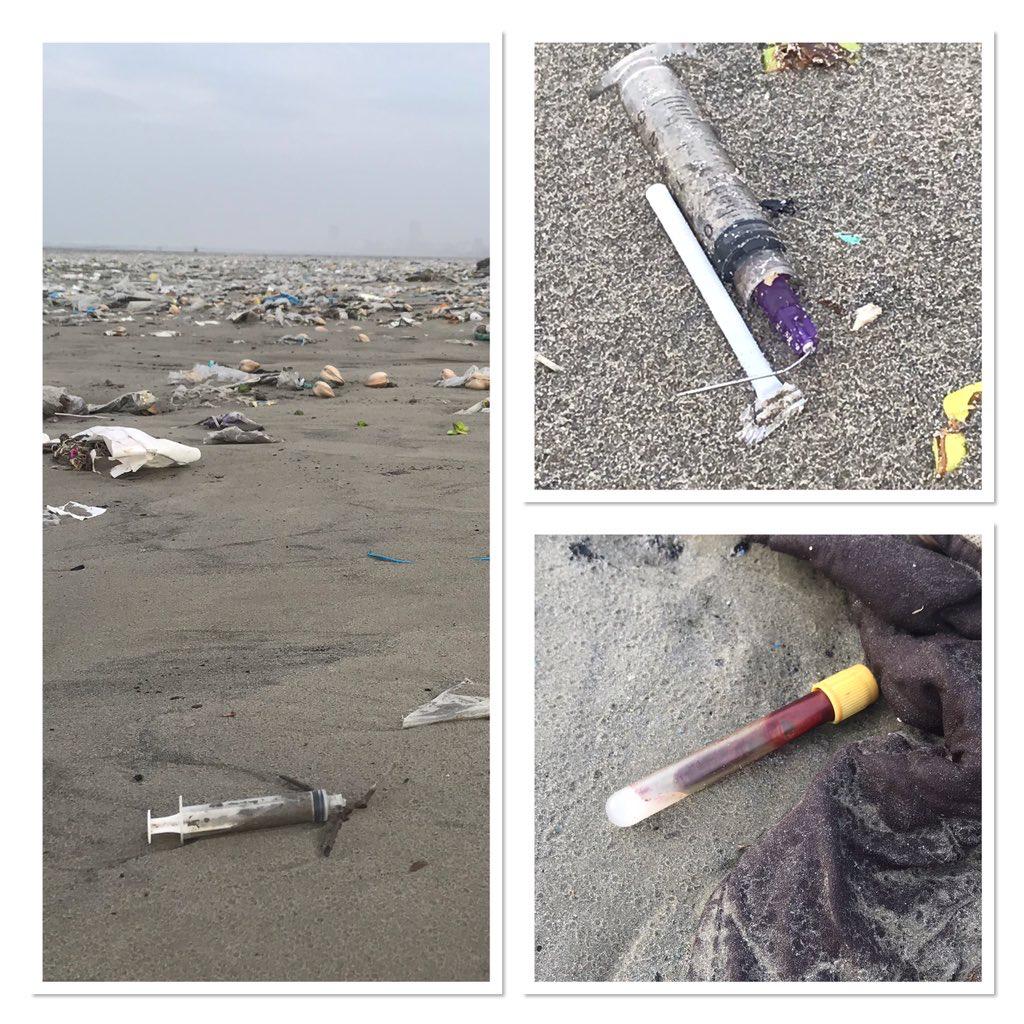 Hundreds of open-needle syringes, vials of blood and all sorts of hospital waste covered kilometers of Clifton beach making is extremely hazardous!

There is kilometres of medical waste including hundreds of open needle syringes amongst other things, that has come in from the ocean. Clifton beach, at this moment, is extremely dangerous and needs to be shut down #CliftonBeach #MedicalWaste #BeachShutDown #ImSoSorryKarachi pic.twitter.com/VEDZUdauNe

Why has such contaminated waste suddenly started to pour out from within the sea? Who was illegally dumping medical waste instead of responsibly disposing off? This red-alert situation was paid no heed by the concerned authorities, showing their level of indifference and incompetence. After Shaniera posted a series of tweets regarding this matter, it finally caught the much-needed attention, as Pakistanis showed serious concern and shock over this.

I have stayed silent for too long. Every tv channel needs to be running this now. You have a duty of care to protect the lives of the people of Karachi and tell them Clifton beach, as it stands, is totally unsafe for anyone!

Sadly in Pakistan for our provincial government and any authority to get in action, the problem at hand has to go viral on social media or else they will sleep on it until it magically disappears by itself. Hence, Pakistanis raised their voice sharing her tweets and videos on Twitter causing the hashtag ‘Clifton Beach’ to become one of the top trends.

Karachi’s situation is truly saddening and hints towards an incurable disease(s) outbreak including Aids and Hepatitis that might just engulf every citizen, with several inches of stagnant rainwater in most of the alleys and roads to harmful waste on the shores; this city isn’t crumbling, it has been destroyed.

Shaniera’s voice including all of Pakistan’s finally reached to the deaf ears of Sindh government and a section 144 was imposed!

I have walked on Clifton beach everyday for the last 4 years and I have never been scared until today. This beach needs to be shut down now

The infected area is finally closed off for the public and a clean-up drive has been initiated by the city government. Senior Superintendent of Police in South Karachi on Tuesday said that strict action and measures will be taken against those who have made Sea View in Clifton their dumping ground of harmful toxic waste.

Karachi city needs to be build again from scratch with better infrastructure, institutions and responsible authorities that will together work towards reviving this lost city back to its glory.

Mohsin Abbas Haider’s Wife Files For Divorce And This Might Finally Put An End To Their Marriage!
Azaz Syed Thanks The Pakistani Nation On Donating For A Rickshaw Driver’s Daughter With Disability!
To Top