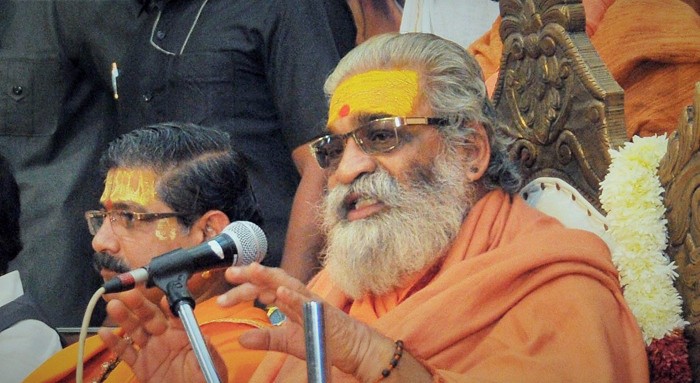 Islam is the fastest growing religion. Have you not heard this many times? Across the world, the proportion of Muslims is rapidly increasing. It is due to the fact that many people are choosing to believe in the teachings of Prophet Mohammed SAWW and converting to Islam. There are estimates suggesting that Islam will take over Christianity by 2070 to become the most followed religion in the world. The rapid growth in the following of Islamic teachings has irked many in India. And thus a major Hindu leader has asked Hindus to have 10 kids each.

The bizarre demand asks Hindus to get rid of the norm of having two and go for 10 kids instead. This came from a Hindu leader during a 3-day event backed by extremist Hindu organization Rashtriya Swayamsevak Sangh or more commonly known as RSS. Vasudevanand Saraswati, who is also regarded as a saint was the one making the demand during his speech. The event ended with the cry of ‘Save Hindu’.

Here is what the Hindu leader said at the RSS backed event:

“Discard the two-children norm. Have 10 kids instead, don’t worry about who will fend for them, god will take care of your kids.”

Indian children are one of the most malnourished kids in the world. There is humongous poverty in the country where more than 50 crore people survive just below Rs 20 a day. Hunger is so prevalent that there are reports estimating that over 20 crore Indians sleep hungry every night. So a demand such as this by the Hindu leader is not only bizarre, it’s baffling.

The rate of conversion to Islam in India is so high that the ripple effect has reached celebrities who have chosen to follow teachings of Prophet Mohammed. According to Times of India, the list of converts includes celebrities like A.R Rahman (Born AS Dileep Kumar), Sharmila Tagore who became Ayesha and Dharmendra (Born Dharam Singh Deol).

RSS is the organization of which the current Indian Prime Minister Modi has been a full-time worker. It has tried to forcefully convert people to Hinduism under the campaign of ‘Ghar Wapsi’. It has also been behind the campaign of Beef ban and attacking those who ate it.

RSS has a history of violence and militancy and has been blamed for the murder of Gandhi because of his views. In the 1980s a massive campaign was launched by RSS to build a temple at the place of Babri Masjid, the mosque was demolished by many including RSS in 1992. The organization was banned for the third time and the decision was overturned by Indian courts. Fast forward to 2014 under Modi’s rule, it was the first time that the chief of RSS spoke on state TV, live.

Does the 10-kids demand relate to ‘Ghar Wapsi’?

‘Ghar Wapsi’ is another campaign launched by RSS during the current Modi government to force minority groups, mostly Muslims and Christians to convert to Hinduism. The campaign as its name suggests, ‘Back Home’ tries to forcefully convert people to Hinduism by telling them that their ancestors were Hindus so they should be too. The failed campaign has used differing tactics to lure poor and vulnerable by promising them economic benefits or by using direct or indirect threats. It’s the failure of ‘Ghar Wapsi’ type of campaigns that has led to panic in the quarters that are afraid of the rise of Islam in India and thus making bizarre demands.

Given RSS’s past of victimizing Muslims of India, both by violence or other means, this current demand of increasing number of Hindus by having 10 kids each, one could safely say that this is an additional try to counter the growing number of Muslims and shrinking Hindu population percentage. Whatever the result, one thing is certain, the common Hindu of India will suffer because of this demand. Suffer from poverty, hunger and inequality while those who spoke enjoy the luxuries of leadership.

This Pakistani-American Left The U.S Army To Bring Mixed Martial Arts To Pakistan
Aamir Khan’s Upcoming Film ‘Secret Superstar’ Is A Film Many Of Us Can Relate To
To Top