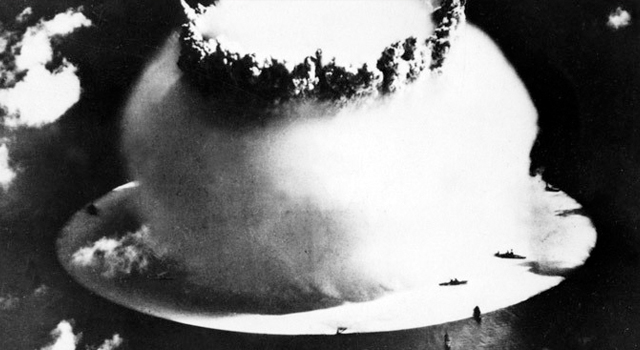 The Marshall Islands, a small 70-square mile string of islands in the Pacific Ocean with a population in the tens of thousands, announced Wednesday it is suing nine nuclear powers, claiming each has violated an international weapons agreement.

The island chain is perhaps best known for hosting a number of US nuclear tests in the decades following World War II. A new suit filed in The Hague, Netherlands Thursday against each of the nine countries in the International Court of Justice (ICJ) claims that instead of working together toward disarmament, as rhetoric would imply, the worldâ€™s superpowers are in fact updating their nuclear arsenal and adapting it to the 21st Century.

The suit takes aim at the five countries named in the 1968 nuclear non-proliferation treaty (NPT), which includes the US, China, France, the United Kingdom, and Russia (the benefactor of the Soviet Unionâ€™s nuclear arsenal). Also named are India, Pakistan, and North Korea, which are not included in the NPT. The Marshall Islands estimated that the combined nations will spend $1 trillion on their arsenal over the next decade.

Marshall Islands leaders asserted that countries where the nuclear weapons are being modernized are committing a â€œflagrant denial of human justice.â€ The suit does not call for any financial compensation, only the beginning of actions that would reduce the number of nuclear weapons in the world.

â€œOur people have suffered the catastrophic and irreparable damage of these weapons, and we vow to fight so that no one else on earth will ever again experience these atrocities,â€ Tony de Brum, the countryâ€™s foreign minister, said in a statement to Agence France-Presse.

US State Department spokeswoman Jen Psaki refused to comment on the matter, with representatives from other countries named in the suit claiming they were unaware of any such court action.

The President of the California-based Nuclear Age Peace Foundation, David Krieger, told the Associated Press that the case is especially notable because it comes from the Marshall Islands, although there is hope that other countries will join support the effort.

â€œI personally see it as kind of David and Goliath, except there are no slingshots involved,â€ he said.

Already lending their names to the effort are Iranian-born rights lawyer Shirin Ebadi and Nobel Peace Prize winner South African Archbishop Desmond Tutu, who issued a statement saying the world â€œmust ask why these leaders continue to break their promises and put their citizens and the world at risk of horrific devastation.â€

Countries recognized in the NPT essentially agreed not to acquire new nuclear weapons, yet â€“ while the number of nuclear weapons has dropped since the end of the Cold War â€“ there are still 17,000 weapons in known existence, more than enough to completely destroy the planet.

The overwhelming majority of those weapons are under the control of the US and Russia, although the Marshall Islands also accused the UK, in particular, of breaking international law because of its ongoing effort to replace the submarine-launched Trident arsenal.

â€œThe UK has not pursued in good faith negotiations to cease the nuclear arms race at an early date through comprehensive nuclear disarmament or other measures, and instead is taking actions to improve its nuclear weapons system and to maintain it for the indefinite future,â€ the court documents said, as quoted the Guardian.

Krieger, the consultant, said smaller nations have become increasingly frustrated with the international superpowers over the past two decades as promising nuclear talks quickly ran out of steam and morphed into empty gestures.

â€œOne thing I would point to is the US withdrawal in 2002 from the Anti-Ballistic Missile Treaty; that cast a shadow over future disarmament movement,â€ he said. â€œOne other thing, in 1995, the NPT had a review and was extended indefinitely. I think the nuclear states party to the treaty felt that once that happened, there was no longer pressure on them to fulfil their obligations.â€