Are you into cars? Well whether you are or not, you must be aware that limousines have always been a luxury vehicle. However, this TikTok star, Shahroz has taken his limo completely beyond the normal standard of lavish and includes a downright ridiculous amount of features, amenities, and tech.

Shahroz, one of the TikTok stars of Pakistan owns the only model of 2018 limousine in the country. The lad imported the Toyota Lexus Tundra world-class limo from the USA. He recently gave an interview to Daily Pakistan.

Upon being asked how he developed an interest in cars, the TikTok star says, “First of all, my father has a business of cars. Secondly, ever since childhood, I have sat in a number of big cars. This is why I have so much interest in cars. Moreover, as time passed, the models and brands kept changing. So since childhood, it has been a dream of mine to have luxurious cars.” 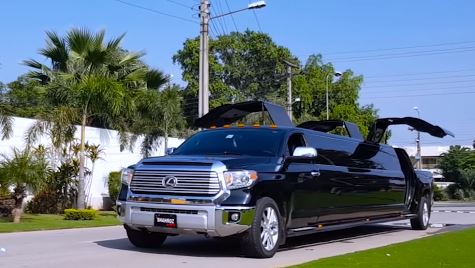 The TikTok star has had a limo before as well. However, it was an old model. Shahroz says, “I had this craze to get the latest model of limo made and to bring it to Pakistan. So I went to America and got this made in about six months, especially for Pakistan.”

What’s so exceptional about this TikTok star’s limo?

In addition to this, Shahroz talks about the car and tells that it is a left-handed drive and has a 5700 cc engine. Moreover, the limo is of Toyota Tundra, 200 inches stretch, with front vertical doors along with back doors. Moving on to the next question, the host asks which car he would compare the comfort level of this car. TikTok star Shahroz explains that this limo is the latest model of 2018 in Pakistan, and there is no comparison of this to any other car. 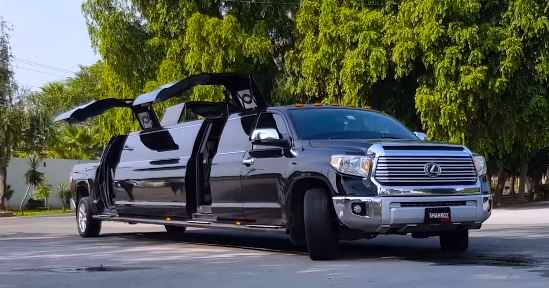 He talks about its outstanding features. It as LED lights, a modified Lexus which is chrome plated. It has foldable seats, multimedia steering with a digital meter, and original TV navigation. Not only that but it also has four airbags on the front.

Apparently, the lad uses this car very rarely. Mostly, Shahroz only uses it with his friends, for birthday parties or such occasions.

“I have traveled to Islamabad in this a couple of times,” he says. Shahroz’s car has a 12-person seating capacity and at the back, it has three LCDs, a dance floor, disco lights, a cool box, and a bar. Additionally, it also has a privacy divider and an intercom to talk to the driver.

Shahroz also has kept a mechanic at his home for his dream car. Not a single part of the limo is available in Pakistan and has to be imported from the US. Lastly, he shares that he bought this for about 5lac dollars. However, he says that with the hike in dollar rates, it would not have been affordable during these times.

Read More: Pakistani Man Spends $30,000 Only On The Add-Ons Of His Golden Heavy Bike