Sadly though, Pakistani forego the notion that sometimes someone can get affected by unnecessary comments and body-shaming jokes. Seeing how many people succumb to depression and because of these comments and statements can be offensive.

Since the emergence of social media and digital platforms, cyberbullying has taken a new turn making the lives of many miserable and difficult.

Another case of body-shaming shook us to the core as a 24-year-old Pakistani girl Alleena Fatima was body-shamed to such an extent; that she began having suicidal thoughts. What is even sadder is how even her family members weren’t spared from this cyberbullying fiasco.

Namecalling and pressing her to stop posting online; the poor girl was deprived of any happy sentiments or words of encouragement about her talent. 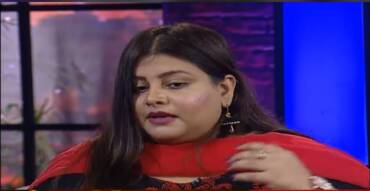 She mentions during her discussion with television host Maya Khan that she used to post TikTok videos with her family but ever since her videos started going viral, they were going viral for the very wrong reason.

She breaks down into tears as she mentions the heartbreaking incident about how even her brother and sister-in-law were equally treated poorly.

It saddens us to see how Pakistani society is deprived of humanity and no one bothers about hurting someone’s emotions or sentiments over little petty things. From calling her a cow to making fun of all her family members the poor girl tells about how people reacted to her even if she walked down the street.

“Wo dekho gae ke saath bakri bhi hai!” These were the type of comments she received on a daily basis! And to say we are both disgusted and ashamed is an understatement.

The TikTok star mentions if it weren’t for her friends, family, and followers, she might have taken her own life.

When will this brutality end?

However, the only thing that we wonder is when will this brutality end? When will realize the importance of mental health? Despite how we see so many give in to depression or take their lives due to disturbance in mental health.

It is important for us to understand the difference between jokes and actual offenses before we make amazing talent to take their lives. Mental health is equally as important as physical health. It is time that Pakistani start to refresh their century-old thoughts and norms and think more open-mindedly.

We applaud this young girl’s courage and strength; despite the fact what she had to go through. May you live a long and happy successful life.