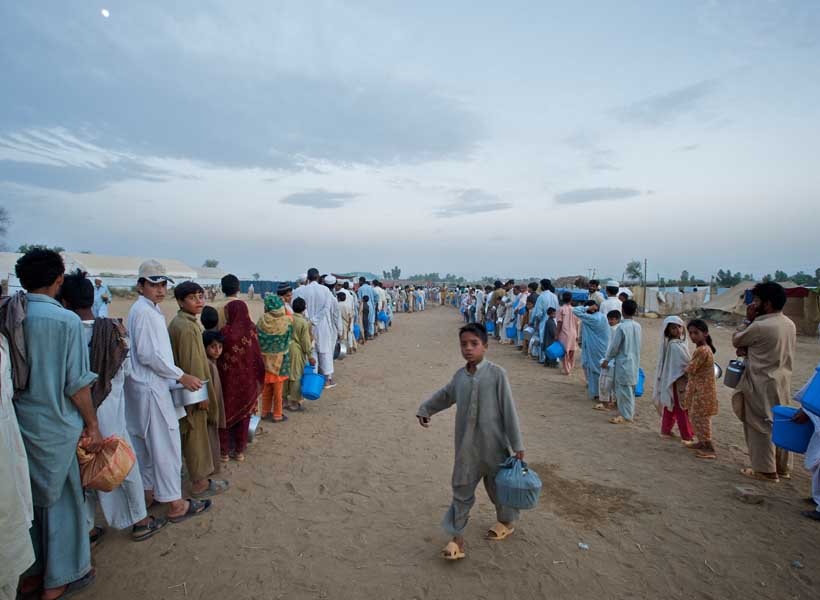 ISLAMABAD / PESHAWAR:The number of internally displaced persons (IDPs) from North Waziristan Agency soared past 750,000 on Tuesday â€“ the day when 13 suspected terrorists were killed in a fresh air raid in an area believed to be a stronghold of foreign militants, particularly Uzbeks.

More than seven terrorist sanctuaries were flattened in the predawn raid as warplanes streaked across the area, according to the media arm of the military, the Inter-Services Public Relations (ISPR).

Foreign fighters were among those killed, it added. As of Tuesday, 400 suspected terrorists have been killed in Operation Zarb-e-Azb that was launched on June 15.

The fresh air strikes in Degan area came on the heels of a visit by army chief General Raheel Sharif to North Waziristan where he called for eliminating all terrorists without any discrimination and made it clear that security forces would hunt down militants across the country.

Commenting on the ground-offensive, which commenced on June 30, a military official termed it a â€˜daunting taskâ€™ as security forces carry out door-to-door searches and clear the area of insurgents. The official added that the operation was the last major battle against terrorists.

Operation to be completed in two weeks

The military has not given any timeframe for the completion of the Waziristan operation.

However, Khyber-Pakhtunkhwa Governor Sardar Mehtab Abbasi said on Tuesday that it would take another two weeks to clear the regions of militants.

Once the operation is completed, the government will review the situation and the displaced families will be repatriated following a clearance from the security agencies, he told the media after meeting a tribal jirga from North Waziristan at the Governor House in Peshawar. The jirga comprised tribal elders, including the descendent of Faqir of Ipi, Maulana Sher Muhammad.

The government fully realises that the Waziristan tribesmen are facing a human tragedy, he said but assured the jirga that the federal and provincial governments were working in coordination to provide maximum relief to the IDPs.

Governor Mehtab said that he has directed the political agent of North Waziristan to set up an office in Bannu to personally supervise relief efforts in the districts.

North Waziristan has emptied out since the launch of the operation. According to the state-run APP news agency, around 751,986 IDPs have been registered so far. It, however, added that final figures would be available after verification from the National Database and Registration Authority (Nadra).

Mostly, these IDPs have been seeking shelter in the Khyber-Pakhtunkhwa districts of Bannu, DI Khan, Lakki Marwat, Karak and Hangu, while an estimated 7% of them have travelled to other parts of the country.

The government says that around 575 individuals entered Kurram Agency via the Afghan province of Khost. Similarly, an estimated 9,440 individuals from Kohat district have migrated to other districts of K-P and Punjab.

Additionally, around 2,791 IDPs have arrived in Karak district, and 772 families have reached Hangu district via Kurran Bridge Thall. Of these, 402 families have migrated to other districts while 370 families have been accommodated in district Hangu.

Also Read: Up to 93 families relocate to North Waziristan village

The government has said that it has adequate resources to provide for the IDPs and doesnâ€™t need to appeal to international aid agencies to step in.

Speaking with the BBC Urdu, Minister for States and Frontier Regions Lt. Gen (retd) Abdul Qadir Baloch said the government had not prepared for the influx of IDPs as it was â€œseriously pursuing dialogue with the militantsâ€. If the government had made preparations for receiving displaced persons earlier, its intentions would be called to question, said Baloch, who has been tasked by the prime minister to look after the IDPs issue.

Baloch rejected claims that the IDPs have faced problems in the provision of relief goods, saying the armyâ€™s 45 Engineering Brigade is assisting in relief efforts. The brigade played an important role in relief work following the Swat operation in 2009 and has experience in rehabilitative work, he added. â€œThere is no limit to the governmentâ€™s budget for relief work.â€