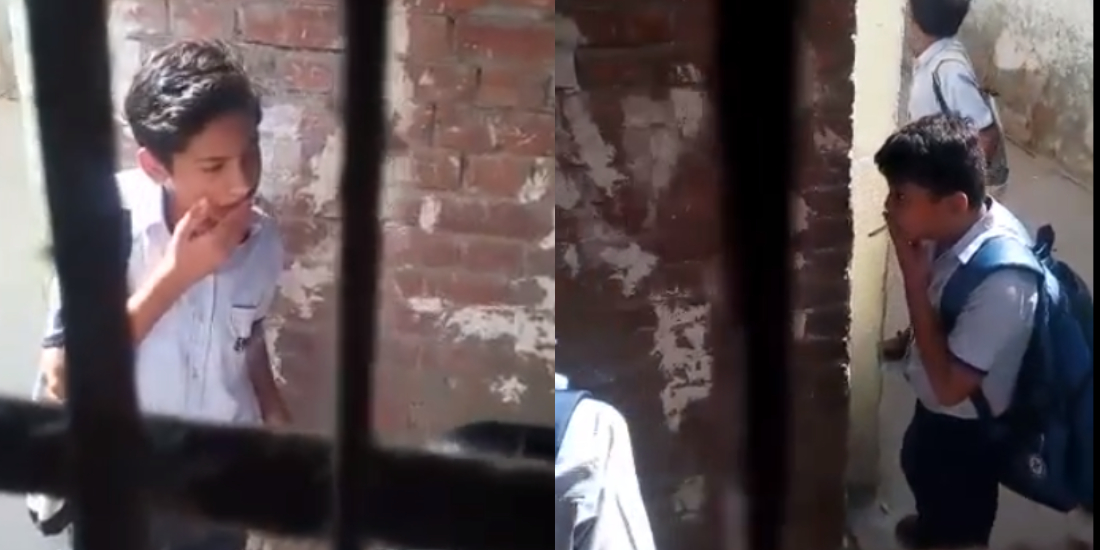 The thin line between free will and exploiting the boundary where you do actual wrong is somewhere blurred these days. People who do wrong either to themselves or to others, somehow try to explain the very act by saying that they have the free will to do anything they wish to do.

It is believed that everything is considered to be in the category of free will until and unless it is not harming the person itself and anyone else around them.

Usually, younger kids get preyed by such terms and often do harm to themselves.

These kids in the video where caught smoking outside there school premises, someone from the school window recorded their video without making them notice.

The kids seem the age of 9 to 12 and all they are doing is puffing cigarette for fun!

It is difficult to say where this video belongs to; since the video has no sound and the school monogram is not very visible in the video. Catching only a few young boys will not solve the problem, parents alongside teachers have to look around who their kids are meeting. Keeping a check at the kid’s friends and the gathering is important; also what they see and interact on their social media and internet.

It is always better to prevent before than being sorry later. Who would know that these kids won’t do anything wrong in the later years of their life if they are not rectified now!

And it is more like a social case where you see kids doing such a thing and shouldn’t just go on your own thinking that it doesn’t matter to us; but rather inform their guardians about their whereabouts.

Fawad Khan And Imran Abbas Have Been Nominated As The World’s ‘Most’ Good-Looking Men And WOAHH!
Literate Nation, Better Pakistan – Here’s Why Education Is Important For Every Child
To Top