School Actually Send Notice To Parents For Not Paying Fees 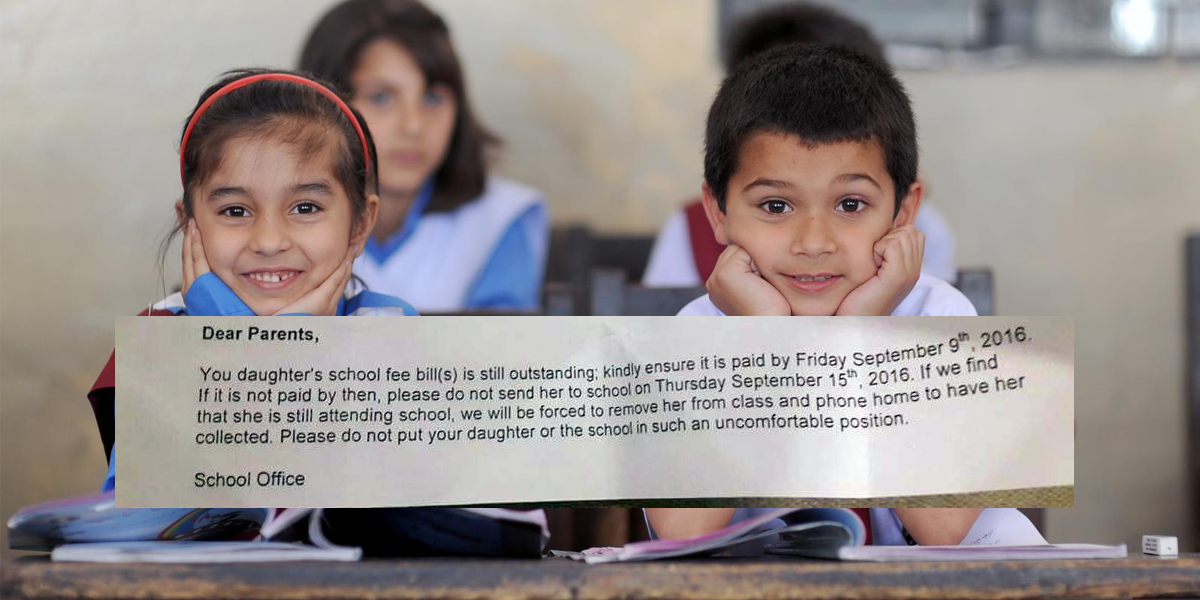 School – a very significant and prestigious place where children learn and grow. Our children spend a major part of their lives in schools. Growing up in the 90s, I don’t only remember them to be extremely affordable but also very friendly. With an exception of a few, most schools were able to cater to the middle class household.

But recently, we have come across how a majority of private schools are looting. The fee structure has become incredibly unreachable for the middle class parent. Yet, in the efforts to ensure the highest quality of education to their children, they are making every effort to pay.

It won’t be too far fetched to say that the school industry has turned into a mafia. A picture of a note from a highly regarded school in Lahore has shown up on the social media in which the school is asking the parents to pay the fee by a certain date or else the child would be sent back home.

It’s fairly understandable that they would want their tuition to be paid in due time. But to have the parents threatened like this is supremely deplorable.

With our public schools in shambles, these big names in the school businesses have slowly come around to build a monopoly for themselves. They have built a sense of pride in being associated with them and it’s damaging the education of our children. If your child is not studying in a reputable (read: expensive) school, he is not only made to feel ashamed, but also made to think that his education is not up to par with students of other institutions.

Do you think a school as renowned as this one really did send this notice to the parents or is it just a fake picture that’s doing rounds just for defamation? It’s really disappointing and saddening if it is really true but if it isn’t, it’s even more sad to see that people will go to such extent to defame each other.

Have the schools in our country been truly hijacked by the business mafia? Or is this threatening letter false? What are your thoughts on this? Let us know!