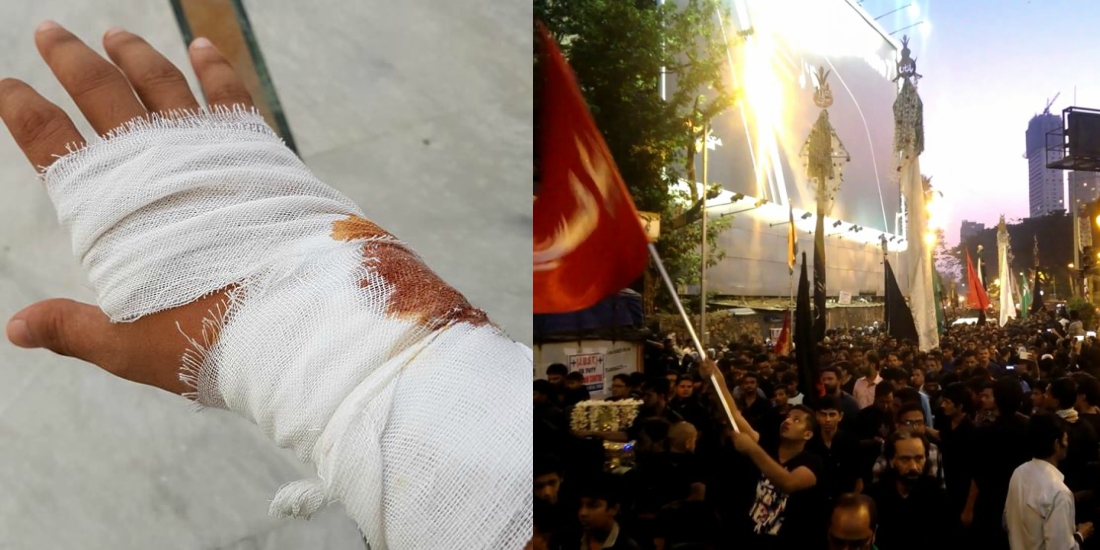 Islam is a religion of peace and love. Every Muslim on this planet knows that for a fact. From duties towards your family to duties towards your neighbors – Islam tells all of us to be kind and patient. It NEVER tells you to assault someone on the basis of their religion.

A few days ago, an incident went viral on Facebook. A man wearing white shalwar kameez and having a “sunnati” beard was assaulted by a group of extremist youngsters.

The text reads as follows:

I write this with a heavy heart and evidently injured self.
About yesterday something quite unexpected happened as I was returning from the juma prayers.

After the juma prayers had finished, I was going towards the market and was passing by a juloos when some kids of nearly 15-16 years of age surrounded me and asked me where I was going, I told them I was going to the market for grocery shopping. One of them said, “jhoot bolta hai saley deshatgard, tu yahan dhamaka karny aya hai na?” I was taking this lightly and thought the kids are just trying to have some fun and started walking out of the area of juloos.
These kids stopped my way and started with the abuses (like maa behen and stuff) after the casual abuses they started calling me names like “Yazeedi Ghora, Imam e Hussain RA ka qatil (how am I the killer of Imam e Hussain??), Shimmer and stuff like that. Keeping in mind these kids had Knives for Matam.
I asked them how am I the Murderer of such great people? They said “tere hi baap dada ne mara tha unhy” mere baap dada ne kaisy mara aal e Rasool ko yar?

I was wearing white shalwar qameez and I have a Sunnah beard on which they said “tum dehshatgardon ka yehi hulya hota hai”
I asked them to let me go as I had to take home some grocery for lunch, (and I was quite worried by now). I return they said “tum logon ko jaan se mardena chahiye yazeedion”
Saying this they started swirling the knives at me, I tried to save myself and in the process I got the cuts.
There is another injury that they gave me of which I cannot post a photo. It is 1 or 2 inches above my sensitive point where i have got 6 stitches. They swirled the knives towards my sensitive point saying “tum logo ki tw nasal hi khtm kardeni chahiye” and they gave that cut. Luckily the knife stroke fell a bit above the point.
As these kids saw the blood, they ran away.
Luckily a policeman saw me in this condition when i was making my way out of the juloos and took me to the nearby clinic.
The question I want to ask is, k hum apny bachon ko kya sikha rahy hen? Ye nafrat ye bughz? I AM A SUNNI. I FOLLOW SUNNAT OF RASOOL ULLAH SAWW AND I LOVE THE AHL E BAIT AND SAHABA more than myself. And there is no Muslim be it shia or sunni that isnt grieved at the Martyrdom of Hazrat E Imam Hussain and their family. Stop cultivating hatred towards us. Please.

The people who did this were part of a Muharram Juloos but I don’t think they were Shias. They weren’t even Muslim. True Islam teaches love and positivity. Imam Hussain (AS) was the grandson of the Holy Propher (PBUH). The pain of his sacrifice is felt equally among both sects, be it Shias or Sunnis. It is only extremists from both sects that instigate the violence.

True Shias and true Sunnis love each other because that is what Allah told us to do. He told us to love His creations and His Prophets. Those who don’t follow this command have no right to call themselves Muslim.

We must promote love and affection among both communities. There are so many Sunnis who do Sabeel and Niaz and so many Shias who take part in Sunni customs and traditions as well. In Pakistan, there is room for both. Stop the violence and spread the love.