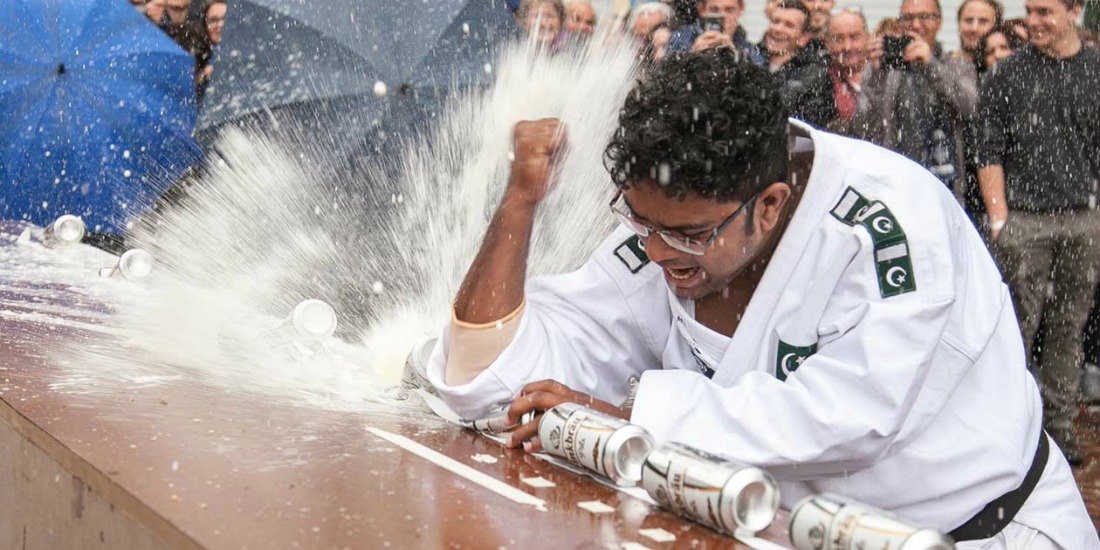 If you’ve spent your childhood in Pakistan, somewhere along the way, you must have taken a karate class at school or some institute. Of all the students, some take martial arts more serious than others. One Pakistani who pledged his life to the beautiful art just broke the Guinness World Record for crushing most beer cans in 60 seconds!

Meet Muhammad Rashid, the Pakistani the whole world is talking about! Not his first Guinness Book World Record title, Rashid has just printed his name on another record. In the video, you can see Muhammad Rashid expertly crushing 77 beer cans with his elbow in a matter of 60 seconds only.

According to Guinness World Records, “The Guinness World Records rules for this challenge state that the cans must be unopened at the beginning and then crumpled to a minimum width of 3 cm (1.18 in). Organised by the Associazione Cons.erva, a large audience came to watch the attempt in Gemona, Italy and cheer Muhammad on.”

The country needs to be extremely proud of Rashid’s feat and the authorities should give him special concessions and financial appreciation for putting Pakistan’s name in the Guinness World Records so many times. However, we know that might be far-fetched idea because our authorities are loath to providing financial assistance to athletes.

Still, we, the people of Pakistan, should appreciate Rashid for his immaculate performance at the Guinness World Records.

Pakistanis Mocking And Humiliating Others For Imperfect English Shows How This Nation Has Yet To Progress!
Disney With Her Brave New Princesses Represents Ordinary Woman As Extraordinary Human Beings
To Top