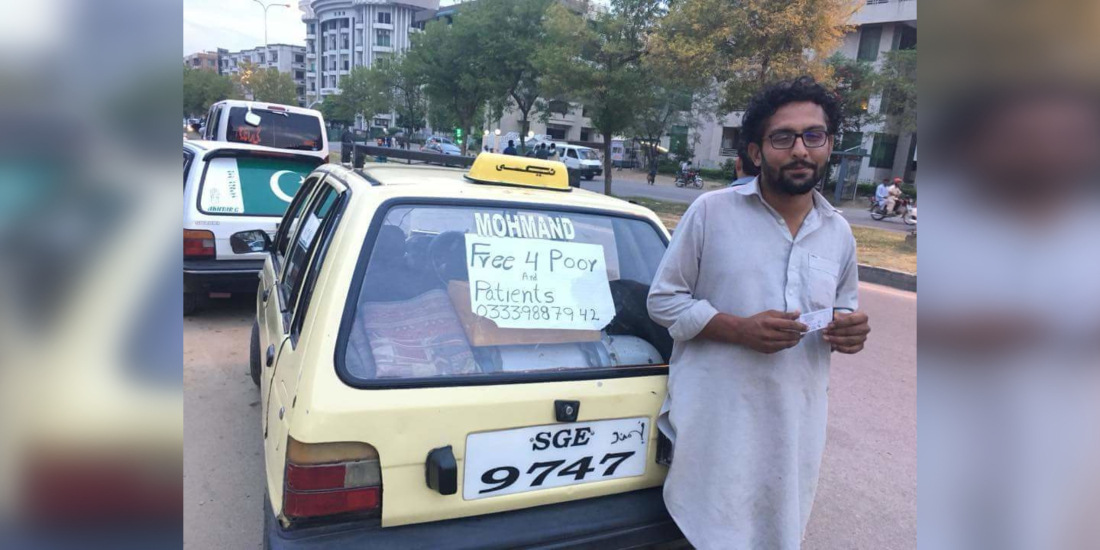 We have seen people who help others and never ask for the award of philanthropy or any recognition for that matter. Recently, a rickshaw driver’s photo started circulating where he claimed that “Eid ka matlab kia?” and told people that he has been giving free rides to the poor and little kids who couldn’t pay. People were moved by his gesture that, on the day of eid, where people are all ready to loot each other, he ded=cided to give out something for free. What’s an eye-opener is the fact that he’s not even a richie rich!

Another guy was photographed on the streets of Islamabad, where he had a paper stuck to his Taxi’s back glass which read: “Free for poor and patients.” and attached his phone number so that anyone if in need, could call him. At F-11 sector of Islamabad, he was seen spreading love and empathy.

How many times have we witnessed people who have less are the ones who give more? People who are empty-handed themselves tend to offer more to others what they have in their capacity. People who are homeless when they are given some extra food or some extra cash for themselves and when they are asked by any fellow citizen to share, they tend to give out whatever they have with both hands.

There is nothing fabricated in it. These are actually social experiments conducted by different people who film these experiences with the homeless. Empathy only comes in people who know how it feels when you have experienced the same situation in which you are seeing the other.

Giving out what you have and sharing only creates a sense of happiness that is not achieved by holding those material things back.

Hope you’d share and see the magic of someone’s else’s smile on you.

Somebody Raised A Serious Question Against Amir Liaquat And People Came Up With Hilarious Answers!
This Political Candidate in Karachi Actually Laid in Sewage to Get Votes and Has Gone Insanely Viral
To Top