This Is How Twitter Reacted To The Cyber Crime Bill 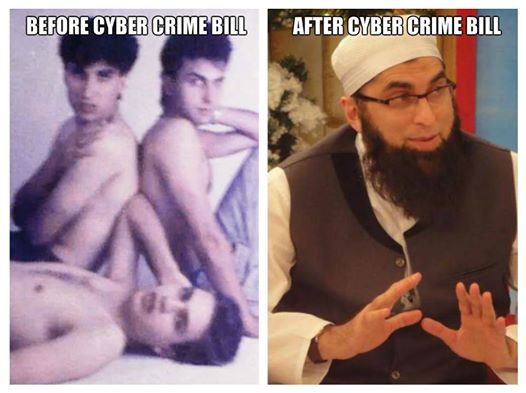 Now that the Cyber Crime Bill has been approved by the senate, we might have to change what we post on the social media so that we don’t get jailed and have Twitter meetups in Adiala. Twitter people showed us what to do by trending the hashtag #TweetsAfterCyberCrimeBill and the result was hilarious.

Maryam Nawaz has such a great vocabulary. They should rename Merriam-Webster to Maryam-Webster #TweetsAfterCyberCrimeBill

The only captain we know is Captain Safdar.

Sher is the national animal of Pakistan.

Sher is national animal of Pakistan. In English it is called Lyin' #TweetsAfterCybercrimeBill

4. Everyone in this government is amazing, ok?

No tweets against PML-N. Everyone in that party is the best.

One must learn from Abid Sher Ali. Well mannered and looks very educated.#TweetsAfterCyberCrimeBill

5. The truth they won’t tell you

But now we will know every reality thanks to Cyber Crime Bill.

***don Bridge is falling down.

Load shedding is the best thing happened to us. It’s like the government wants us to be patient and get out of our houses and go get some fresh air. Load shedding is a blessing. Long live Nawaz Sharif.

To my one and only leader, Nawaz Sharif #TweetsAfterCyberCrimeBill pic.twitter.com/1YGV4cWDTu

There is no army chief but Raheel, and Nawaz Sharif is his last prime minister.

So yes, this the kind of stuff you are to post on the social media if you want to keep yourself from getting jailed. All the memes and jokes you make against the government? They are a one-way ticket to jail now.

Read Also: Shut Up Pakistan! The Cyber Crime Bill Is Out To Silence You

Shut up Pakistan! The Cyber Crime Bill Is Out To Silence You
Dear Society- Because Of You, My Shaadi Is A Gulaami
To Top