This Guy Reveals How Facebook and Google Track Each and All of Us and It's Scary! 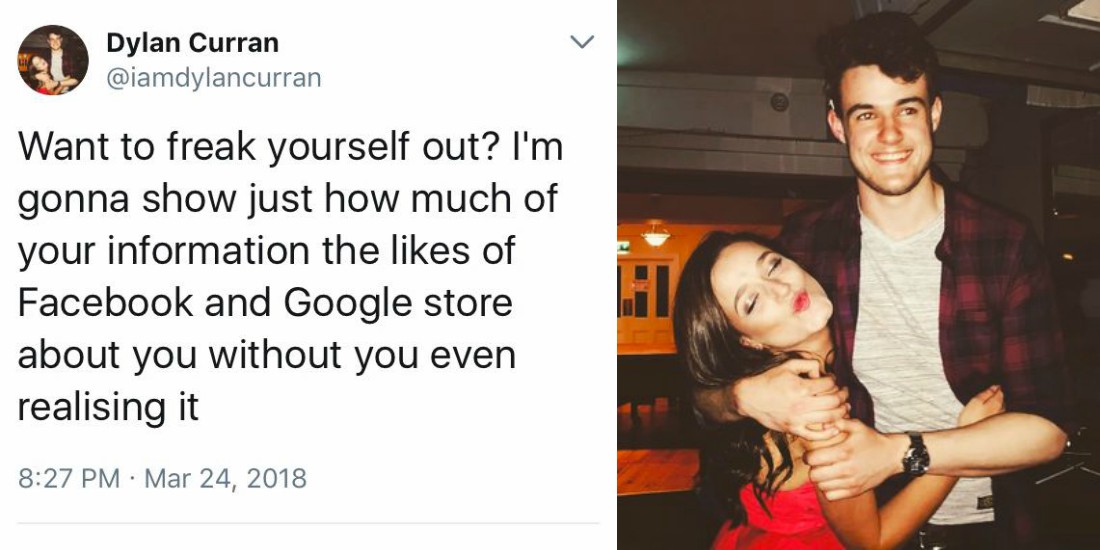 Ever since the emergence of the internet and social media, we can’t help but praise the facilities it has brought to the world. The emerging line of online businesses, a normal human as a housewife who handles household but also runs a business all through the internet. And as a giant, as it may seem we have witnessed many big companies taking complete advantage of the ever-evolving life of social media.

This one guy on Twitter took it upon himself to understand what really happened to in last 12 month when he was traveling and all he did was to carry his phone around with him. He made a thread of 30 tweets in which he explained how Google and Facebook spied and save his information as fragile as his text messages and audios when he deleted them from his apps. Shocking! no?

The Twitter thread of Dylan Curran made it’s way on Facebook too and people shared the screenshots of his Tweets.

“You are NAKED on Google and Facebook. Make no mistakes about it. Your private life is completely exposed. Just how exposed can be gauged by these sensational screenshots from Twitter. Be prepared to get blown away. It’s very scarrrrrrrrry!”

You are NAKED on Google and Facebook. Make no mistakes about it. Your private life is completely exposed. Just how…

Want to freak yourself out? I'm gonna show just how much of your information the likes of Facebook and Google store about you without you even realising it

1. https://t.co/1z255Zt1zf Google stores your location (if you have it turned on) every time you turn on your phone, and you can see a timeline from the first day you started using Google on your phone

All the minute detail that is possible to be captured!

2. This is every place I have been in the last twelve months in Ireland, going in so far as the time of day I was in the location and how long it took me to get to that location from my previous one pic.twitter.com/I1kB1vwntT

Deleting information from one device is never enough!

3. https://t.co/qFCgY6QLN5 Google stores search history across all your devices on a separate database, so even if you delete your search history and phone history, Google STILL stores everything until you go in and delete everything, and you have to do this on all devices

Google creates that ad profile based on the things you search!

4. https://t.co/QRfgwkNj80 Google creates an advertisement profile based on your information, including your location, gender, age, hobbies, career, interests, relationship status, possible weight (need to lose 10lbs in one day?) and income

It’s all the game of keywords that you use and that too on what time. Algorithm!

5. Google stores information on every app and extension you use, how often you use them, where you use them, and who you use them to interact with (who do you talk to on facebook, what countries are you speaking with, what time you go to sleep at) https://t.co/RJeRlXhtdq

6. https://t.co/5B6qxUvrJz Google stores ALL of your YouTube history, so they know whether you're going to be a parent soon, if you're a conservative, if you're a progressive, if you're Jewish, Christian, or Muslim, if you're feeling depressed or suicidal, if you're anorexic…

7. Google offers an option to download all of the data it stores about you, I've requested to download it and the file is 5.5GB BIG, which is roughly 3 MILLION Word documents https://t.co/3Na4FxjNXk

8. https://t.co/3Na4FxjNXk This link includes your bookmarks, emails, contacts, your Google Drive files, all of the above information, your YouTube videos, the photos you've taken on your phone, the businesses you've bought from, the products you've bought through Google…

Almost everything that has been created under your name and is on internet!

9. Your calendar, your Google hangout sessions, your location history, the music you listen to, the Google books you've purchased, the Google groups you're in, the websites you've created, the phones you've owned, the pages you've shared, how many steps you walk in a day…

10. Facebook offers a similar option to download all your information, mine was roughly 600mb, which is roughly 400,000 Word documents

Ever after you have deleted them long ago

Remember? The game of keyword?

Ummm.. You never know. Maybe they store this info to check which sort of stickers are used the most

13. Somewhat pointlessly, they also store all the stickers you've ever sent on Facebook (I have no idea why they do this, it's just a joke at this stage) pic.twitter.com/4F5sExbynf

If they can track the location without opening the phone, this shouldn’t surprise anyone

So they tenichally store all the data from all the app that are connected to Facebook!

15. And they store all the applications you've ever had connected to your Facebook account, so they can guess I'm interested in politics and web and graphic design, that I was single between X and Y period with the installation of Tinder, and I got a HTC phone in November… pic.twitter.com/bkXruVZxLP

16. Side-note, if you have Windows 10 installed, this is a picture of JUST the privacy options with 16 different sub-menus, which have all of the options enabled by default when you install Windows 10 pic.twitter.com/oHyfYndTnJ

Everything you ever do on your phone and laptop

17. This includes tracking where you are, what applications you have installed, when you use them, what you use them for, access to your webcam and microphone at any time, your contacts, your e-mails, your calendar, your call history, the messages you send and receive…

18. The files you download, the games you play, your photos and videos, your music, your search history, your browsing history, even what RADIO stations you listen to

We carry the device with ourselves to let it spy on us. Otherwise, a chip can easily do that!

19. This is one of the craziest things about the modern age, we would never let the government or a corporation put cameras/microphones in our homes or location trackers on us, but we just went ahead and did it ourselves because fuck it I want to watch cute dog videos

Contacts, location history, celender and what not!

20. I got the Google Takeout document with all my information, and this is a breakdown of all the different ways they get your information pic.twitter.com/mPAbyh1I9k

Here’s how it works:

2.They sell the data of the users to the other companies for a hefty amount.

4. These companies later use this data for their product development and design, in accordance with the availability of their target audience.

There much more to these facts much deeper that no normal human would gain insights of. Recently a group of people who worked for these giants became the whistleblower and that’s when the reality of it revealed.

The Video Of These Two Cousins Opening Fire At Each Other Over Falling For The Same Girl Is Bizarre AF!
10 Most Trending ‘Slang’ Words In The East And Their Meaning
To Top