Racism is at peak and no matter how organizations mention, “Say no to racism,” it is a pertaining unethical act in every other society. Regardless of how developed a country gets, there always will be extremists and they won’t tolerate people outside their ethnicity.

Muslims is one of the few communities that is frequently targeted for racism when they are in a non-Muslim country. Despite them making a significant population in countries such as England, and them owning various employment ventures such as restaurants, they are often targeted for racism.

This Video From Huddersfield, England Shows A Woman Abusing a Muslim Man Who Was Breaking his Fast In Front of her

According to Daily Mail, here’s what the women uttered to the Muslim man:

“The woman was sitting in a doorway on Kirkgate when she began abusing the man in the early hours of yesterday morning. Her victim, a 21-year-old who does not want to be named, took out his phone to record her slurs. The victim said he was walking down Kirkgate after breaking fast for Ramadan when the woman began her unprovoked tirade of abuse. 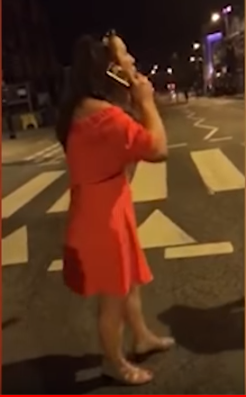 The woman, who even appeared to be on the phone at the time, yelled:

‘Do you wanna know why I’m being racist? In my own country? Because it’s your race that’s blowing up our f***ing nation.’ The aggressive abuse continues as she screams: ‘What are you going to do? I’ll s*** in your face you P*** b******.’ He said: ‘I was minding my own business. She just started having a go at me. I asked her what her problem was and she just carried on.”

This isn’t the first and probably not the last time a Muslim person has been attacked in such a manner. Racism is always an ethical violation when it comes to the way Muslims are treated in a minority country.

Hope the mindset will change one day.

Read Also: A Pakistani In America Provided Free Food To More Than 6,000 Flood Victims Of Texas!