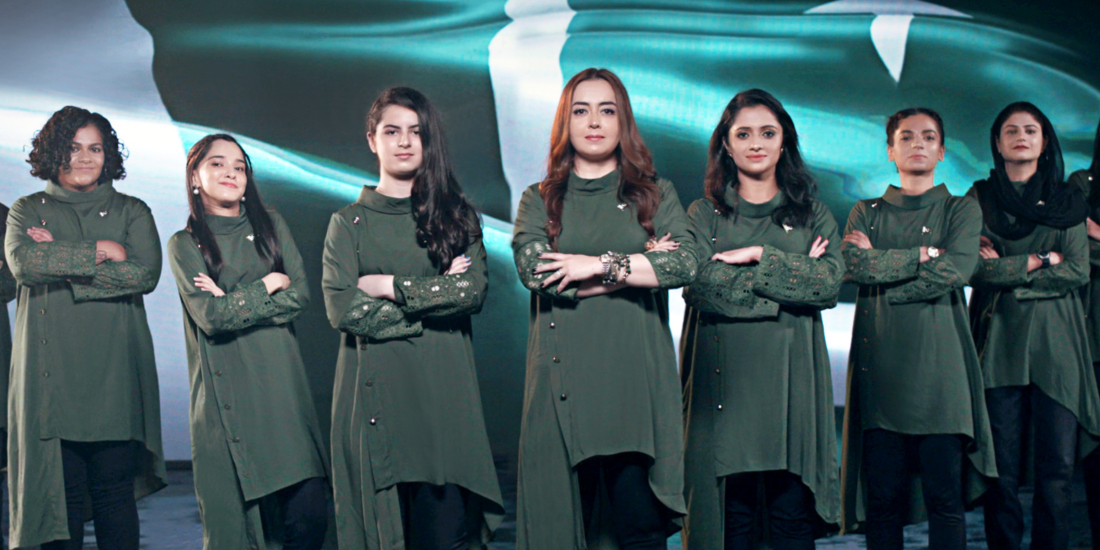 “No nation can rise to the height of glory unless your women are side by side with you;” -Muhammad Ali Jinnah, 1944

Our motherland has come a long way since its birth in 1947. We have faced hurdles, pain and violence and yet against all odds we have accomplished so much over the years all thanks to individuals who put Pakistan before everything else. These people, both men and women have overcome obstacles and difficulties to excel in their fields and make Pakistan proud. This video pays tribute to a 9 such women.

Women have contributed greatly in making Pakistan what it is today. MARIA. B. decided to honour and highlight some of these exceptional women through an anthem. It is a musical salute to all the women of Pakistan, past and present, who stood unbowed against the tide and always did, and are doing, their best in their respective fields of excellence.

The song itself touches deep inside and leaves one emotional & proud. The lyrics,

Are a testament to the passion and love we all have for our motherland that has given us everything.

In this anthem, the brand has highlighted 9 different women, including Maria herself

Sana Mahmud is the multi-talented star of sports in Pakistan. Born in Islamabad, she wanted to be a sportswoman since she was just a child. She was just fifteen years old when she played her first national level tournaments in both football and basketball.

She captained the first ever basketball national team to be formed after over 20 years and was the Top Scorer in their first international win against Afghanistan.

After graduating from LUMS, she became a midwife (dai) and specialized in Maternal and Neo-Natal Health. Hundreds of women (mostly underprivileged) owe their successful child delivery to her.

She joined the Lady Dufferin Hospital’s 18-month midwifery programme in Karachi. In the process of her training, she started a small fund, generating resources from her friends and family to help out mothers and babies whose treatment couldn’t be paid for.

Fiza Farhan, is a young women entrepreneur, featured in the US Magazine Forbes 30 Under 30 List of Social Entrepreneurs for 2015 and again in Forbes Asia List of 30 Under 30 Social Entrepreneurs in 2016. Furthermore, she represents Pakistan on the United Nation’s Secretary General’s first ever High Level Panel on Women Economic Empowerment along with global leadership in addition to advising the Government of Punjab, as Chairperson to Chief Minister Punjab’s Task Force on Women Empowerment.

Previously, Fiza was the CEO of Buksh Foundation and Director of Buksh Energy Private Limited, both companies pioneering unique and demand based multi-stakeholder solutions in the domains of gender equality, inclusive growth, renewable energy and impact investment.

Working in a male dominated industry requires years of effort, struggle and learning. For Sumaira, it was not until the All Pakistan Music Conference (APMC) that she got recognized for her talent and landed a gold medal. She hasn’t let social taboos thwart her love for traditional music and continues to excel in mastering the form of it.

When she was a child, Fatima Hasan was diagnosed with dystonia, a Neuro-Muscular disease & dysphonia, which is a speech disorder. Despite having these disabilities, she persisted and graduated with a Bachelor’s in Design from BNU, Lahore.

Now, working as a designer at an agency along with freelance projects and contributing to her family business, she has made all of Pakistan very proud.

KPK’s Rafia Qaseem Baig has become the first woman in Pakistan to join the Bomb Disposal Unit (BDU). Her accomplishment is particularly significant, especially in KPK province, where a woman has entered the realm of what is considered a “man’s job”(bomb disposal/firefighting).

Kiran Khan is an Olympic swimmer, and one of the first international female swimmers for Pakistan. She first came to national attention at the 28th Pakistan National Games in 2001, where she won 7 gold medals, 3 silver medals and 3 bronze medals.

Rameesha, a former student and current master kickboxer at K7 Fitness and Kickboxing Academy teaches other girls passionate about it and attracts a whole crowd of women and girls eager to learn.

According to her K7 profile: Rameesha Shahid is K7’s first Female Fitness & Kickboxing trainer and #certified fitness instructor. She is a fitness fanatic & was part of the national cricket team. She’s been active in sports from an early age taken a new liking to #Kickboxing, #ExtremeFitness, and #MartialArts.

From reviving embroidery traditions to introducing new cuts and styles, Maria. B has been instrumental in bringing about a significant change in the fashion world. Called the Coco Chanel of Pakistan, Maria.B has steered the company into becoming one of the leading brands in the industry. As a business woman and a mother, she continues to create merit based opportunities for women and men in order to create a sustainable world for our children.

“MARIA.B. salutes all the women of Pakistan with their #independence #anthem, past and present, who stood unbowed against the tide and always did their best in their respective fields of excellence. We are honored to have highlighted some of the finest women who have been working hard to contribute to the stability and development of the nation!”

These women are an inspiration to all of us and an example of what amazing things women can do if given equal rights as men. Who is your female role model? Let us know in the comments below!